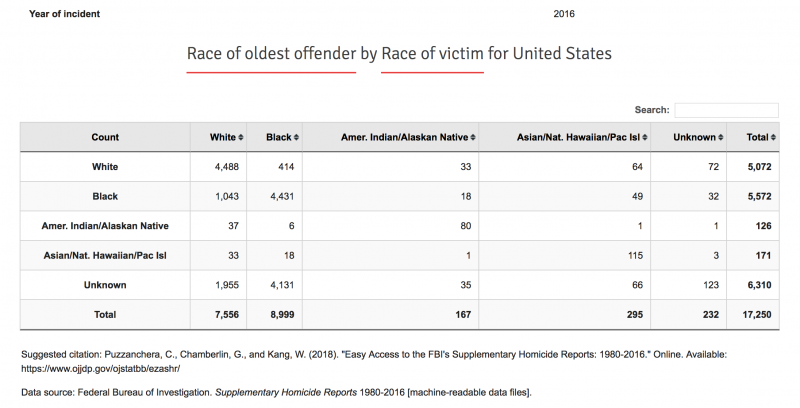 A Note From Alex Jones: This is an incredible illustration of how the corporate, mainstream media works in concert to put out disinformation and obscure the truth to heighten tensions and further balkanize this nation. This is a classic divide-and-conquer strategy.

It came out yesterday that they caught the man who’s reportedly admitted he shot the poor, little African-American girl. Even though that information has been out for a day, in lock-step CNN, the New York Times and dozens of other publications simply ran with the headline that the shooter of the little girl had been reportedly apprehended.

Upon reading the articles, which they should be forced to update, there were no image of his mugshot, there was no image of the fact that he is black, and no mention of the fact that there had been a national hysteria whipped up by Rep. Sheila Jackson Lee (D-Texas) and others claiming this was a major hate crime on our hands, which angered thousands of people who came out to talk about race relations in America about how bad white people are.

Even if the shooter was white, he could have been a mental patient who wasn’t motivated by race.

It now sounds like this case is one of mistaken identity because the suspect apparently thought he was shooting at a rival gang.

Regardless, it shows how the mainstream media seizes on every event, twists it and when the facts don’t go the way they want them to, they don’t retract, they don’t clarify, but rather they bury the story off the radar from public attention.

That’s there big, important point here. In many areas of the country more than half of the blacks are aborted before they’re born, but do we see Al Sharpton and others leading protests against that? No. Do we see CNN covering that? No. Do we see the fact that over 95% of the crime against blacks in Chicago was committed by other blacks? No. But you don’t see these so-called leaders rallying blacks against the culture of violence.

Instead, on any rare case of a white person committing a crime against a black person – or in this case the mistaken assumption of a white suspect – it’s magnified and turned into a racially-based situation because there’s a clear, present, sickening agenda in the mainstream media to do this.

The media is now working in lock-step to cover up the fact that he’s now come and turned himself in and that he’s black. But it’s pertinent to put up the mugshot of the suspect in a nationally-reported investigation such as this one – except, of course, when reality doesn’t match up the mainstream media’s pre-conceived narrative.

This is just like in Europe you’ll hear the media report on “German men who raped women” in places like Cologne but it turns out they’re not German men, they’re migrants who just recently arrived in the country.

It’s all part of a global program against the West to allow the persecution and killing of whites which are covered up, and then conversely when a crime is committed against someone who isn’t white, it’s magnified and turned into a huge deal. Even though these crimes should be reported equally without regards to race.

Overall humanity in general suffers because the establishment using classic divide-and-conquer strategies to keep people of every race, religion or nationality fighting against each other.

The mainstream media is now downplaying the arrests connected to the death of a 7-year-old African-American girl after the “white suspect” in the shooting turned out to be two black men police believe shot at the wrong car during gang warfare.

The media was so focused on fueling racial tensions that it lost motivation to push the story when it turned out to NOT be white-on-black crime, but it’s still huge news that needs to be reported because it highlights the culture of gang warfare that’s damaging African-American communities.

Regardless of the suspect, the victim is still a 7-year-old girl who didn’t deserve to die, and the factors that led to her death still need to be investigated and reported on even if they’re not racially motivated.

To give a brief recap, the little girl was killed in the back of her mother’s vehicle while driving though Houston, Texas, last Sunday.

Left-wing news outlets like Vox breathlessly reported the claims [of a racially-motivated white shooter] without question, asserting that “Jazmine Barnes was killed when a white man fired into her family’s car.”

Time Magazine also reported the assertion of the family’s attorney Lee Merritt that the murder was a racist shooting, while the Washington Post amplified his demand that, “We want to emphasize the racial nature of the attack and that hate-crime charges are appropriate.”

However, it now emerges that the suspected gunman was black.

“Sources tell ABC13 Larry Woodruffe, 24, has been arrested as a second suspect in the case. Those sources say Woodruffe is believed to be the shooter,” reported Jessica Willey and Deborah Wrigley.

All week the media insinuated that the death of Jazmine Barnes was a hate crime committed by a white man. Now that it’s proven not to be a white man who killed her I notice that suddenly the race of her killers is not in the headlines anymore. This is why so few trust the media. pic.twitter.com/4FTSgORNBr

According to a 2016 crime data organized by the Office of Juvenile Justice and Delinquency Prevention, based on FBI crime statistics, intra-racial murders (in which the murderer and the victim are of the same race) are actually far more likely to occur.

In the following screenshots, the offenders are in the rows and the victims are in the columns, with the total number of reported victims for each data set in the bottom row: 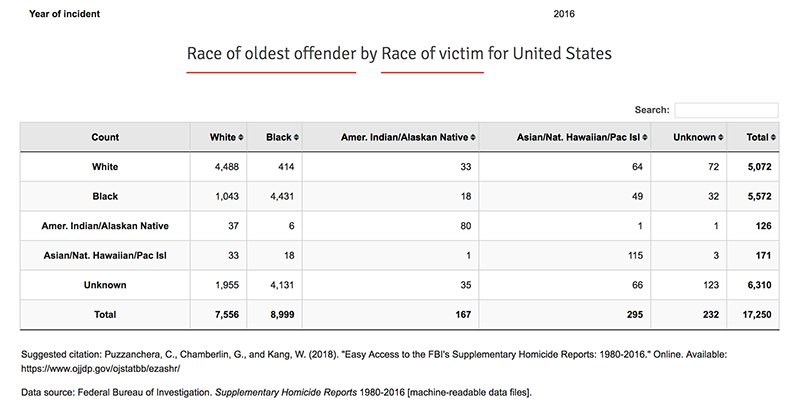 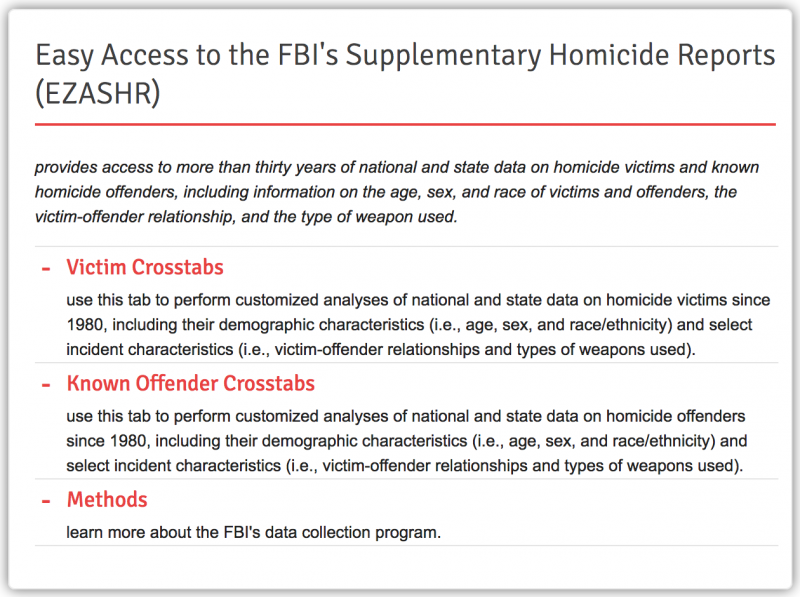 So unless the mainstream media is trying to stir up racial division, there was no reason for news publications to jump to conclusions with definite claims which were later debunked.