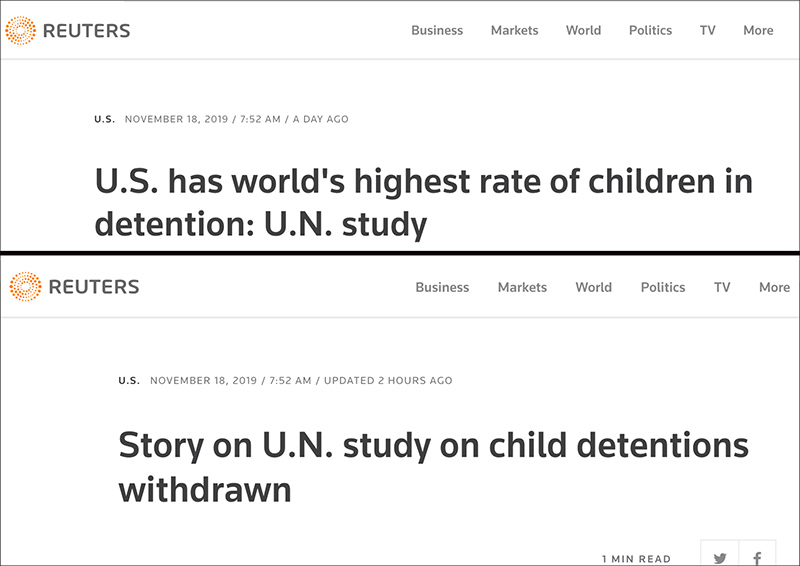 News agencies across the globe on Tuesday engaged in a mass deletion of reports which claimed the US had the highest rate of children in detention centers, after the study’s author clarified the numbers cited actually came from 2015.

In yet another fake news blunder, mainstream media outlets including Agence-France Press, the Associated Press, and Reuters informed their audiences the reports reflected United Nations numbers from the previous presidential administration.

“AFP is withdrawing this story,” the globalist publication announced on Twitter.

“We will delete the story,” AFP added.

Media outlets are deleting these stories instead of correcting the date because it ruins their anti-Trump narratives when people learn Obama locked up kids. They don't care about the truth, just scoring political points. pic.twitter.com/0YOkeCQxj9

In a retraction that now appears at the URL where the article was previously hosted, Reuters wrote:

“A Nov. 18 story headlined ‘U.S. has world’s highest rate of children in detention -U.N. study’ is withdrawn. The United Nations issued a statement on Nov. 19 saying the number was not current but was for the year 2015. No replacement story will be issued.”

The United States has the world’s highest rate of children in detention, including more than 100,000 in immigration-related custody that violates international law, the author of a United Nations study said on Monday.

The spread of misinformation stemmed from comments made by independent United Nations expert Manfred Nowak, who on Monday claimed, “We have more than — still more than — 100,000 children in migration-related detention in the United States of America.”

➡️ Over “100,000 children are in migration-related detention" in the USA

– Independent Expert Manfred Nowak, who led the UN Global Study on Children Deprived of Liberty, to be published tomorrow pic.twitter.com/TtrfmdizvC

In an update from the AP Tuesday, Nowak corrected the record to say the “figure was drawn from a U.N. refugee agency report citing data from 2015, the latest figure his team could find.”

“That was before U.S. President Donald Trump, whose policies on migration have drawn criticism, was elected,” the AP’s update notes.

Nowak also claimed the “100,000” figure was actually a “cumulative number of migrant children held in detention at any point during that year, whether ‘for two days or eight months or the whole year,’ not all simultaneously.”

Attempting to salvage their initial report, the AP claimed a corrected figure from “New U.S. government data” found 69,550 migrant children have been in custody in 2019.

Nowak also insisted “the U.S. is holding far more children than are other countries for which he has reliable figures,” according to the AP.

Despite the efforts by some outlets to correct the false reports, the fake news was widely circulated on numerous other media outlets which unfortunately rely on and republish reports from Reuters, AFP and AP.