The Washington Post is taking heat after claiming the Drudge Report was spreading “Russian propaganda.”

WaPo readers blasted the newspaper for attacking Matt Drudge’s news aggregation site for linking to Russian news outlets, despite the fact that Drudge has also linked to WaPo thousands of times over the past years.

“Perhaps if WaPo publish articles that were less biased, more thoughtful, full of investigative journalism instead of non-verified political sleeze, they might get a better rating from the public,” wrote one commentator. “And that applies to the media in general.”

Overall the comment section of the WaPo article is largely critical of the newspaper.

Other commentators pointed out that Drudge links to WaPo far more often than Russian outlets, which of course highlights the hypocrisy of the article.

And WaPo also lamented the fact that Drudge has far more traffic.

“It had more than the New York Times and The Washington Post, combined — with enough space left over to also outpace Hearst,” the article stated.

But attacking Drudge certainly won’t help WaPo’s traffic in comparison, which is apparently so low that WaPo is practically begging readers $1 for a “digital subscription” that used to cost $10. 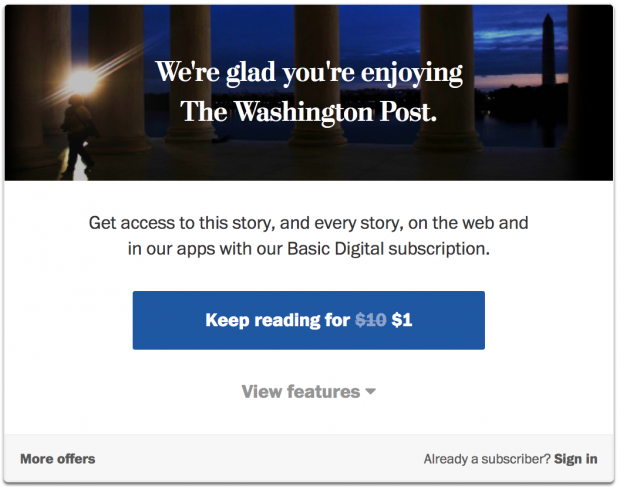 Of course, Amazon founder Jeff Bezos didn’t buy WaPo to make it hugely profitable but to use the newspaper to advocate his brand of corporate globalism.

The establishment has never liked how much influence Drudge, an independent journalist, has over the news cycle, and now that they can’t seem to stop President Trump, they’re shifting to a “scorched earth” policy to burn Trump’s advocates.

And as a sidenote, the WaPo’s attack on Drudge puts its attack on Alabama senatorial candidate Roy Moore under further scrutiny.

Regardless of whether you believe the claims, the fact they were published by WaPo, a known Democratic Party cheerleader that endorsed Moore’s opponent weeks prior, automatically puts their validity into question.

In other words, if the accusations are factual and impartial, why were they published first by WaPo, an outlet claiming the Drudge Report spreads “Russian propaganda” when it has linked to WaPo a hundred times more?