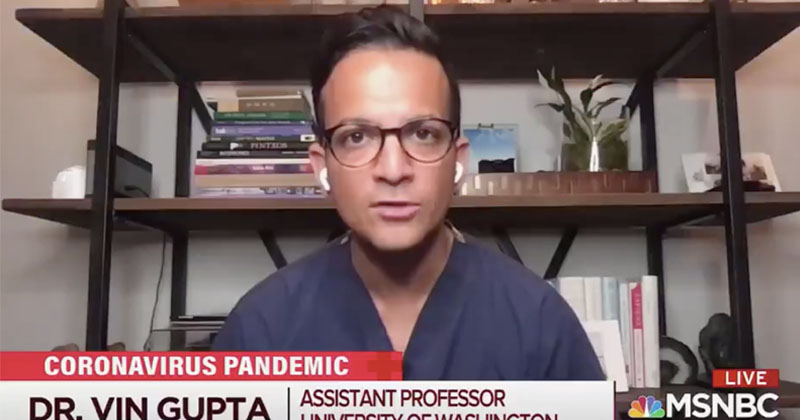 MSNBC’s medical expert Dr. Vin Gupta thinks that all political rallies should be prohibited due to the coronavirus — despite the fact that he marched in the Seattle Black Lives Matter protests just days earlier.

“We need the president and the vice president to not undermine the adversaries of the public health world. We have the president about to have a super-spreader event in Tulsa,” Gupta said on MSNBC’s “Morning Joe” on Friday.

“The fact he’s asking for informed consent of his supporters before a rally where there’s no social distancing or masking is egregious. That’s what I do before I do a procedure in the ICU because there might be potential harm but there’s benefit.”

On Morning Joe, Dr. VIN GUPTA says “we need to BAN political rallies!” The president is about to have a “super-spreader event in Tulsa”! Trump and Pence need to stop ruining it for their “adversaries” in public health! pic.twitter.com/D7BUw1n6nI

“What’s the benefit to these supporters? Other than giving applause to the president,” he continued. “It makes no sense. We need to stop that. We need to ban political rallies. We need to encourage masking, frankly making it mandatory, I’ve been saying that for weeks.”

Interesting comments given Gupta was marching alongside Black Lives Matter protesters in Seattle just days prior.

Last week, on “The 11th Hour” with Brian Williams, Gupta justified his participation in the protests (which did not observe social distancing in the slightest), saying that “law enforcement institutions” are “deadlier” than the coronavirus.

“How can somebody, in my case for example, advocate a strict lockdown of everybody and the economic catastrophe that resulted and then also say it’s okay to go protest?” Gupta began.

“Well, here’s the thing, Brian. We as doctors, as nurses, as respiratory therapists, what we value more than anything else is prioritizing risks by how deadly they are. And that’s why all of us are saying it’s OK to protest, because the social inequities propagated by elements in our law enforcement institutions, by our health care system writ large, are simply put deadlier to the most vulnerable in America than the coronavirus is.”

Whatever you say, Gupta.

Now that President Trump is gearing up for one of his famous Make America Great Again rallies in Oklahoma next weekend, the mainstream media talking heads are doing their best to pivot from supporting the weeks-long mass BLM demonstrations to condemning all forms of public gathering — as long as it dampens support for Trump.

Trump’s rallies are usually newsworthy affairs, not just due to their enormous crowd sizes, but also because Trump tends to make news with humorous remarks about the Deep State, fake news, or the far-left’s insanity.

According to Trump’s campaign, over 300,000 people applied to get tickets for the event.

Meanwhile, Democrat frontrunner Joe Biden is still hiding in his basement with no plans to hold a campaign rally in the near-future.