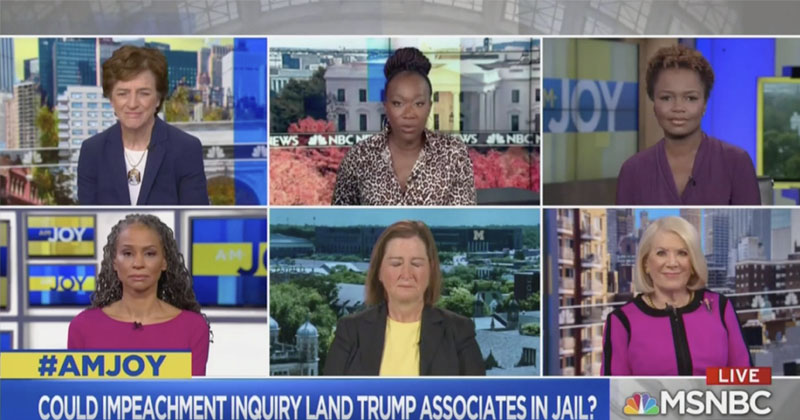 During her show “AM Joy” on Saturday, Reid warned Trump officials that they would likely face a similar fate as former Nixon aides, who wound up on the “going-to-jail truck” for committing crimes on Nixon’s behalf.

“There are a number of people who are allowing themselves to be corrupted along with Donald Trump,” Reid said. “And the Nixon example is that Nixon didn’t go to prison, but a whole lot of people around him…went to prison because people were willing to commit the crime for him.”

The guest panel agreed, claiming the “dominoes are falling” and the situation is “unraveling” for Trump, and that Attorney General William Barr “better be thinking about what’s going to happen to him.”

The establishment is in panic mode after learning that Barr asked Italy, the UK, and Australia to assist him with the investigation into the origins of the Russia hoax.

Additionally, the renewed impeachment push based on a whistleblower complaint over a phone call between Trump and Ukraine’s President Volodymyr Zelensky has been coming apart after it was revealed that the so-called “whistleblower” coordinated with House Intelligence Committee chairman Adam Schiff before the complaint was even filed.

In fact, since that effort has been failing, the New York Times is now reporting that a SECOND intelligence operative “whistleblower” is preparing to come forward.

It remains to be seen whether that individual secretly coordinated with Democrats also, but it wouldn’t be surprising if that turns out to be the case.

Mike Adams joins The Alex Jones Show to expose the real possibility that Adam Schiff has fabricated a whistleblower story in a half-witted attempt to attack President Trump.