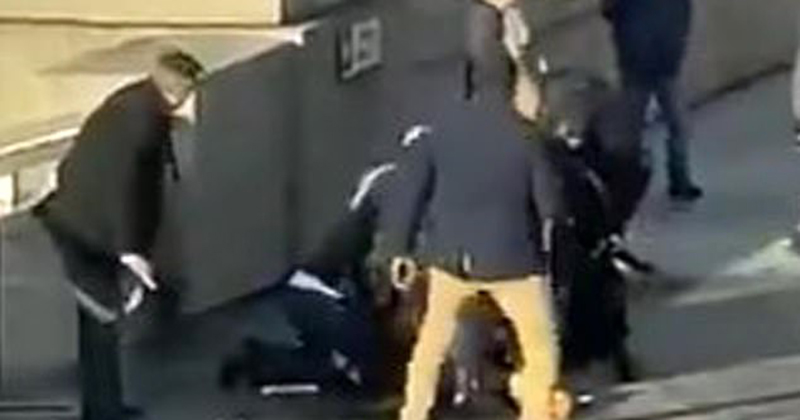 One of the heroes of yesterday’s London Bridge attack is a convicted murderer out on day release, it has emerged.

It is believed James Ford rushed to the scene and tried to save the life of a woman victim of the terrorist. Now 42, Ford was jailed for life – with a minimum of 15 years – in April 2004 for the murder of a 21-year-old with learning difficulties.

Amanda Champion – who had the mental age of a 15-year-old – was found strangled and with her throat cut on waste ground near her home in Ashford, Kent, the previous July.

Police had no leads in the case until a Samaritans worker broke the organisation’s strict confidentiality policy and revealed that Ford, a factory worker and amateur wrestler, had called and confessed: ‘I’ve killed a girl.’

‘The police liaison officer called me saying he was on the TV. I am so angry. They let him out without even telling us. Any of my family could have been in London and just bumped into him.

‘It was a hell of a shock. It is a horrible thing. She said, ‘Have you heard about the incident in London today?’ and I hadn’t. She said, ‘Put in on now and you will see James Ford on the telly.’

Paul Joseph Watson joins The Alex Jones Show to expose the leftists rushing to defend the London Bridge stabber.
By the way, get DNA Force Plus 50% off and get a free bottle of Brain Force Plus now!

‘She said, ‘Don’t worry, it is not him that’s done anything, he’s there and he is being classed as a hero.’ For him to be called a hero – he is not, he is a cold-blooded murderer. For no reason whatsoever, he just went out and murdered a disabled person. I don’t care what he’s done today, he’s a murderer. He is scum. Amanda was my niece and she was vulnerable and he took her life. He knew what he was doing. People don’t change.’