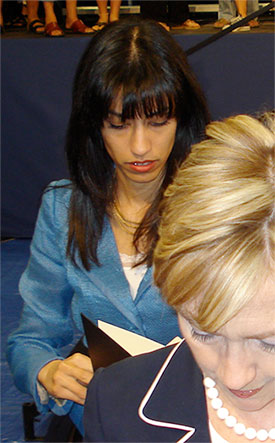 The New York Post reports Huma Abedin will have her own bedroom upstairs in the White House if Hillary Clinton is elected president.

Abedin is of Indian and Pakistani ancestry and lived in Saudi Arabia. She is considered Clinton’s “body woman,” a term describing a personal assistant who accompanies a politician or candidate virtually everywhere.

“Huma’s influence is so pervasive, and Hillary’s dependence on her so total, that it is expected she will have her own bedroom upstairs in the White House,” a Clinton associate Richard Turley told OrbMagazine. “After 20 years as Hillary’s gatekeeper, no one else could screen the calls and decide who gets access as ably as she does.”

Even Clinton’s husband goes through Abedin to get access to his wife.

Al-Liwa Al-Arabi says the Sisterhood is known primarily for its “use [of] women in [the] underground network to smuggle secret documents for [male Muslim Brotherhood] members since women go undetected by security surveillance.”

Moreover, the Sisterhood “depends on new recruits to spread the Brotherhood’s ideology by infiltrating universities, schools and homes” and partners “with other women’s organizations worldwide and work with these concerning Islamic issues and to partner with such organizations to fulfill the interests of the Brotherhood and also to benefit from international women’s conferences and unify all efforts to benefit the Brotherhood globally.”

“Egyptian Al-Dostor revealed that the Sisterhood included 63 International members that span 16 different countries; it’s also confirmed by the Arab Center for Studies, headed by researcher Abdul Rahim Ali. Neither Huma nor any major western media outlet even mention what is common knowledge in the Arab world,” write Walid Shoebat and Ben Barrack.

Shoebat claims “Huma’s mother Saleha was not simply a member, but a leading Egypt’s Muslim Brotherhood’s Sisterhood branch. The Abedins were for decades affiliated with an al-Qaeda financier named Abdullah Omar Naseef, who had appointed the Abedins to start the Institute of Muslim Minority Affairs.”

The Institute of Muslim Minority Affairs was founded by Abedin’s late father and as of 2012 was directed by her mother and is reportedly supported by the Muslim World League, an Islamic organization founded in Saudi Arabia by the Muslim Brotherhood, according to Art Moore. Huma served as an assistant editor for a dozen years for the Journal of Muslim Minority Affairs, the house organ of the institute.

A manifesto commissioned by the Saudi monarchy points to the institute as the vanguard of an effort to mobilize Muslim minorities in the United States to transform America into a Saudi-style Islamic state.

Amid a backlash against five Republican lawmakers who want to probe Muslim Brotherhood infiltration in the federal government, the 2002 Saudi manifesto shows that “Muslim Minority Affairs” – the mobilizing of Muslim communities in the U.S. to spread Islam instead of assimilating into the population – is a key strategy in an ongoing effort to establish Islamic rule in America and a global Shariah, or Islamic law, “in our modern times.”

Sharia law will ultimately provide the political elite with a perfect Trojan horse to control society. Federica Mogherini, the European Union’s head of foreign affairs and security policy, recently stated that “political Islam should be part of the picture” in Europe.

“Since the zenith of ‘political Islam’ is Sharia law, the legal system derived from the teachings of Islam, she is also promoting the imposition of a system that represents one of the most repressive forces on the planet, subjugating women and allowing for extra-judicial murder such as stoning and beheading, both of which are practiced in Saudi Arabia, a country which exemplifies ‘political Islam,’” writes Paul Joseph Watson.

In 2012 the Brotherhood established a relationship with Obama when its members met with officials and White House staffers. The Obama administration openly admitted the US government has worked with the Brotherhood in the past.

“The meeting Tuesday with working-level national security staff officials is just one in a series of meetings between US officials, members of Congress, and representatives of the Muslim Brotherhood,” (White House spokesman Tommy Vietor ) said. “Senators Lindsey Graham, John McCain, and others have met with members of the MB during their visits to Egypt, and US officials, as part of their routine diplomatic outreach, continue to meet with representatives as well.”

The Brotherhood is a well-known Western intelligence asset. As documented by Peter Goodgame and others, the Brotherhood was established with the approval and the support of the British establishment as a controlled opposition to pan-Arab nationalism.

“The CIA was following the example of British Intelligence and sought to use Islam to further its goals” and used the Muslim Brotherhood to gather all “the popular support that they could muster against the rise of Nasser-inspired Arab nationalism to keep their regimes [in Saudi Arabia and Jordan] intact,” writes Goodgame in The Globalists and the Islamists: Fomenting the “Clash of Civilizations” for a New World Order.

Ian Johnson writes for the New York Review of Books that this relationship with the Brotherhood has primarily benefited the Brotherhood, not the United States.

Since the 1950s, the United States has secretly struck up alliances with the Brotherhood or its offshoots on issues as diverse as fighting communism and calming tensions among European Muslims. And if we look to history, we can see a familiar pattern: each time, US leaders have decided that the Brotherhood could be useful and tried to bend it to America’s goals, and each time, maybe not surprisingly, the only party that clearly has benefited has been the Brotherhood.