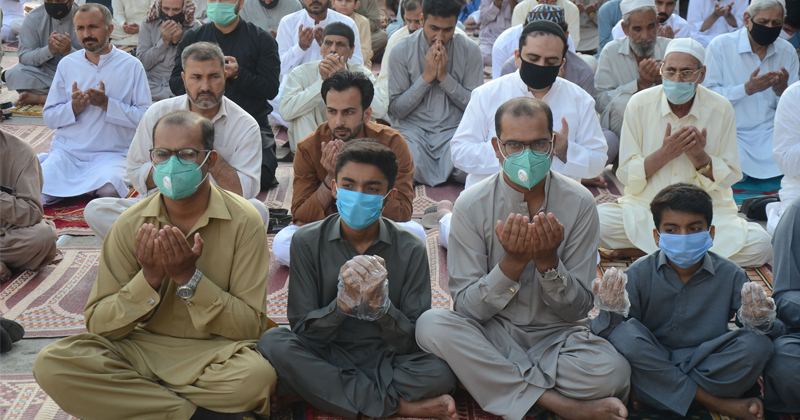 With COVID-19 infections on the rise in South Asia, this could lead to a catastrophe.

“I offered my Eid prayer in a mosque with some 400 fellow worshippers,” Muhammad Ashraf, a shopkeeper in the capital Islamabad, told DW. “Eid is a festival; I hugged my relatives and friends and shook hands with them without any fear of the virus,” Ashraf added.

Mosques in Pakistan saw a huge attendance on Saturday during Eid, which marked the end of the holy month of Ramadan.

Earlier this month, authorities lifted a lockdown, which Prime Minister Imran Khan’s government had imposed to contain the spread of the virus. But experts say the lockdown was never strict, and Islamic clerics refused to follow physical distancing measures from the start.

Pakistan has recorded close to 57,000 COVID-19 cases as of Monday, and over 1,100 related deaths. The infection rate has surged since the lifting of the lockdown.

The partial lockdown measures have taken a heavy toll on the country’s economy, so most people welcomed the easing of restrictions. “We remained indoors for around two months. Eid brought us joy,” Ahmed, a father of three, told DW. “We can’t stay at home for too long. We have to live our lives.”

Bangladesh marked Eid al-Fitr on Monday amid the COVID-19 pandemic, which has claimed over 500 lives in the country. The number of infections is steadily on the rise there, with more than 35,000 people testing positive for the disease.

Health experts say the number of COVID-19 cases in South Asian countries does not reflect the actual situation on the ground because of a low testing rate.

Authorities had also urged people to keep a safe distance from each other and not to hug each other — an Eid custom — to curtail the COVID-19 spread. However, people were seen standing very close to each other in long queues, even pushing each other while entering mosques.

“We tried our best but couldn’t manage the crowd. We could have used force against them, but we didn’t want to do that on Eid. We are still requesting them to follow health guidelines,” Abdur Rouf, a police official in Dhaka, told DW.

In comparison to last year, Eid celebrations were still much somber in the country this time around. Those who offered their prayers in mosque told DW it was a completely different experience without the customary hugging.

“But thanks to Allah, we could offer the Eid prayer. Allah will save us from the pandemic,” Abdul Hamid, a businessman, told DW.

Mizanur Rahman, the chief cleric at Baitul Mukarram Mosque in Dhaka, said he prayed for the wellbeing and good health of everyone in the world.

Islam is the second-largest religion in India, with 14.2% of the country’s population — about 172 million people — identifying themselves as Muslim.

In most parts of India, Eid al-Fitr was celebrated on Monday, barring places like Kerala and Jammu & Kashmir, which commemorated it on Sunday. Eid celebrations across the country remained low key as most mosques remained closed as per the government’s ban on large gatherings.

Most Muslims offered Eid prayers at home, observing physical distancing measures. “For some sects of Islam, mass Eid prayers are mandatory, while for some they are not,” Sabika Abbas Naqvi, a resident of Lucknow city, told DW.

“In Lucknow [capital of Uttar Pradesh state], the biggest Eid congregation is held at the Bara Imambara, but it did not take place this year,” Naqvi added.

In Kerala, Eid prayers were streamed online by clerics to restrict social interaction. Police registered cases against those who gathered for prayers.

India-administered Kashmir has mostly been in a state of lockdown since Prime Minister Narendra Modi’s government last year stripped the region of its special constitutional status and launched a crackdown on Muslim separatists there. However, many Kashmiris offered mass prayers to celebrate Eid.

Hindu nationalists hold Muslims responsible for spreading COVID-19 in the country. The accusations started taking hold after a surge in coronavirus infections was found to be linked to a gathering of an Islamic missionary group, the Tablighi Jamaat, that took place in March in New Delhi. Around 8,000 people had gathered at the meeting site, which then became a hot spot for the virus. The group’s chief, Maulana Saad, was later charged with culpable homicide and negligence.

Many Muslims say they are facing renewed stigma, threats and boycotts in the country. For these reasons, they say, they marked this year’s Eid with an increasing sense of insecurity and uncertainty.