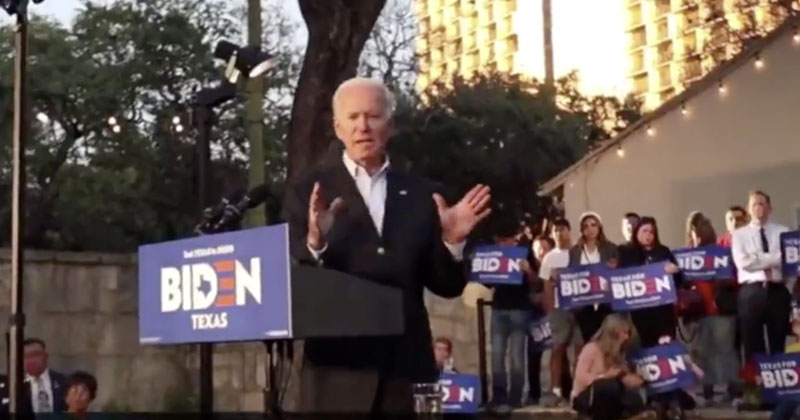 Democrat presidential frontrunner Joe Biden got heckled during a campaign stop in San Antonio, Texas, on Friday by a Infowars listener, who pointed out the former vice president’s Ukraine corruption and his lies about President Trump.

Once Biden began peddling thoroughly-debunked lies about Trump’s comment in 2015 when he said the southern border is bringing drugs, crime, and rapists, the off-camera Infowarrior decided to set the record straight.

“You hear what he said? He said I’m gonna take out those rapist Mexicans!” Biden told the audience.

That’s a lie!
Your son is a crack head! pic.twitter.com/XFs7MciGZQ

“Yeah,” the Infowarrior stated. “And it was your son in the Ukraine!” he continued as the crowd began to jeer.

Well son of a bitch. A Trump supporter gets in Joe Biden's face and it's awesome! #SlamDunk #JoeBiden #HunterBiden #TrumpDerangementSyndrome #UkraineBribery pic.twitter.com/47K7vPUlTr

“You’re the one that offered to withhold a billion dollars! The Council on Foreign Relations? ‘Son of a bitch, he got fired,’ right Joe? Remember that?” the man shouted.

The protester appears to be the same courageous individual who called out Hillary Clinton during her book event in Austin, Texas, last month.

The confrontation comes a week after an irate voter called out Biden’s shady Ukraine corruption at an Iowa campaign stop, where Biden accused him being a “damn liar.”

Democrat presidential frontrunner Joe Biden got heckled during a campaign stop in San Antonio, Texas, by a true patriot, who pointed out the former vice president’s Ukraine corruption and his lies about President Trump.