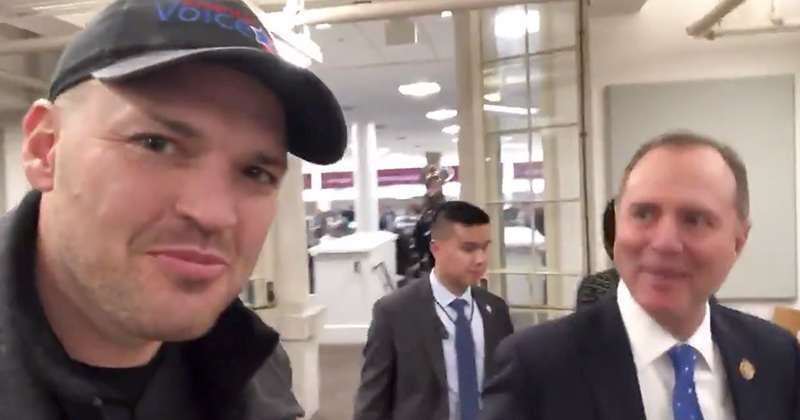 Pro-Trump activist and frequent Infowars guest Ben Bergquam captured epic footage on Wednesday as he confronted Democrat Congressman Adam Schiff (D-CA), asking him what he’ll do when he’s “brought up for treason” and reading his Miranda rights.

“When this fails,” Bergquam asked, referring to the left’s impeachment sham, “What are the Democrats going to do next?”

A smiling Schiff replied, “I’m sorry, I don’t have time for your interview today, but thank you anyway.”

“When you’re brought up for treason, what is your response going to be then?” Bergquam quipped.

Continuing, Bergquam began to read Schiff his Miranda rights, saying, “You’re gonna hear these words later, but you might as well hear them now.”

The video ended with Ben calling for Americans to “stand up” to Democrat attacks on our sovereignty.

Bergquam was busy Wednesday, also confronting far-left Rep. Alexandria Ocasio-Cortez (D-NY) while she was on her way to attend the House impeachment debates.

Ben Bergquam confronting Alexandria Ocasio-Cortez as she heads in to the #ImpeachmentCoup!
Side note: the #GreenNewDealSucks! pic.twitter.com/vk7NFhPNBz

“AOC, when this vote fails what are the Democrats going to do?” he asked the freshman congresswoman.

“By the way, the Green New Deal is terrible, it will bankrupt the country,” Bergquam noted after AOC ignored his first question.

Again repeating his original inquiry, the activist asked, “What are you gonna do when this fails AOC? Do you care that you’re destroying the country?”

Reluctantly responding before walking off, AOC said, “Sir, the President of The United States is going to be impeached today and you need to accept that.”

“Trump is your president and the Green New Deal sucks!” Bergquam shouted as AOC walked away.

On Monday, Bergquam made headlines after President Trump tweeted out a video of him and Infowars’ Will Johnson confronting Democrat House Judiciary Committee chairman Rep. Jerrold Nadler (D-NY) and telling him “Shame on you. You’ve broken your oath.”

“The American people see through it.” https://t.co/1WTujQY7e6

In November, Bergquam confronted Adam Schiff and discussed the incident with Infowars’ Owen Shroyer on the War Room.