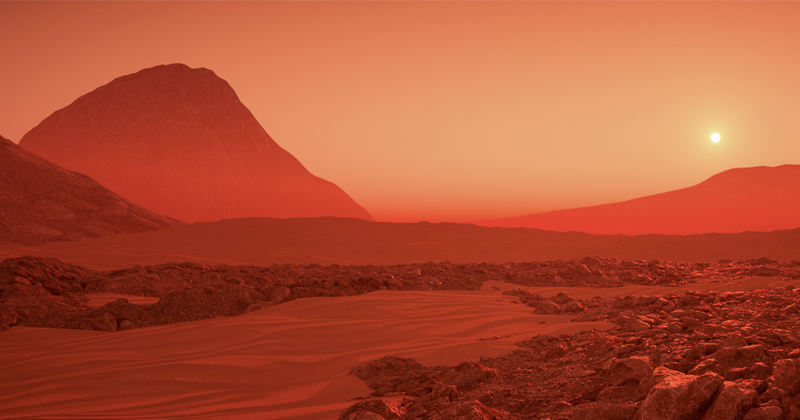 In 1966, two Caltech scientists were ruminating on the implications of the thin carbon dioxide (CO2) Martian atmosphere first revealed by Mariner IV, a NASA fly-by spacecraft built and flown by JPL. They theorized that Mars, with such an atmosphere, could have a long-term stable polar deposit of CO2 ice that, in turn, would control global atmospheric pressure.

A new study from Caltech suggests that the theory, developed by physicist Robert B. Leighton (BS ’41, MS ’44, Ph.D. ’47) and planetary scientist Bruce C. Murray, may indeed be correct.

Carbon dioxide makes up more than 95 percent of Mars’s atmosphere, which has a surface pressure of only 0.6 percent that of Earth. One prediction of Leighton’s and Murray’s theory—with enormous implications for climate change on Mars—is that its atmospheric pressure would swing in value as the planet wobbles on its axis during its orbit around the sun, exposing the poles to more or less sunlight. Direct sunlight on the CO2 ice deposited at the poles leads to its sublimation (the direct transition of a material from a solid to a gaseous state). Leighton and Murray predicted that, as exposure to sunlight shifts, atmospheric pressure could swing from just one-quarter that of today’s Martian atmosphere to twice that of today over cycles of tens of thousands of years.

Now, a new model by Peter Buhler, Ph.D. of JPL, which Caltech manages for NASA, and colleagues from Caltech, JPL, and the University of Colorado, provides key evidence to support this. The model was described in a paper published in the journal Nature Astronomy on December 23.

The team explored the existence of a mysterious feature at the south pole of Mars: a massive deposit of CO2 ice and water ice in alternating strata, like the layers of a cake, that extend to a depth of 1 kilometer, with a thin frosting of CO2 ice at the top. The layer-cake deposit contains as much CO2 as in the entire Martian atmosphere today.

In theory, that layering should not be possible because water ice is more thermally stable and darker than CO2 ice; CO2 ice, scientists long believed, would quickly destabilize if it was buried underneath water ice. However, the new model by Buhler and colleagues shows that the deposit could have evolved as a result of the combination of three factors: 1) the changing obliquity (or tilt) of the planet’s rotation, 2) the difference in the way water ice and CO2 ice reflect sunlight, and 3) the increase in atmospheric pressure that occurs when CO2 ice sublimes.

“Usually, when you run a model, you don’t expect the results to match so closely to what you observe. But the thickness of the layers, as determined by the model, matches beautifully with radar measurements from orbiting satellites,” says Buhler.

Here’s how the deposit formed, the researchers suggest: as Mars wobbled on its rotational axis over the past 510,000 years, the south pole received varying amounts of sunlight, allowing CO2 ice to form when the poles were receiving less sunlight and causing it to sublime when the poles were sunnier. When CO2 ice formed, small amounts of water ice were trapped along with the CO2 ice. When the CO2 sublimed, the more stable water ice was left behind and consolidated into layers.

But the water layers do not totally seal the deposit. Instead, the subliming CO2 raises Mars’s atmospheric pressure, and the layer cake with CO2 ice evolves in equilibrium with the atmosphere. When the sunlight starts declining again, a new CO2 ice layer forms on top of the water layer, and the cycle repeats.

Because sublimation episodes have generally been declining in intensity, some CO2 ice was left behind between the water layers—thus, the alternation of CO2 and water ice. The deepest (and therefore oldest) CO2 layer formed 510,000 years ago following the last period of extreme polar sunlight, when all the CO2 sublimed into the atmosphere.

“Our determination of the history of Mars’s large pressure swings is fundamental to understanding the evolution of Mars’s climate, including the history of liquid water stability and habitability near Mars’s surface,” Buhler says. This work was part of Buhler’s thesis work at Caltech. He continued the research in his current role as a postdoctoral researcher at JPL. His co-authors are his former advisers Andy Ingersoll and Bethany Ehlmann, both professors of planetary science at Caltech; Sylvain Piqueux of JPL; and Paul Hayne of the University of Colorado, Boulder.

The study is titled “Coevolution of Mars’s atmosphere and massive south polar CO2 ice deposit.” This research was funded by NASA.