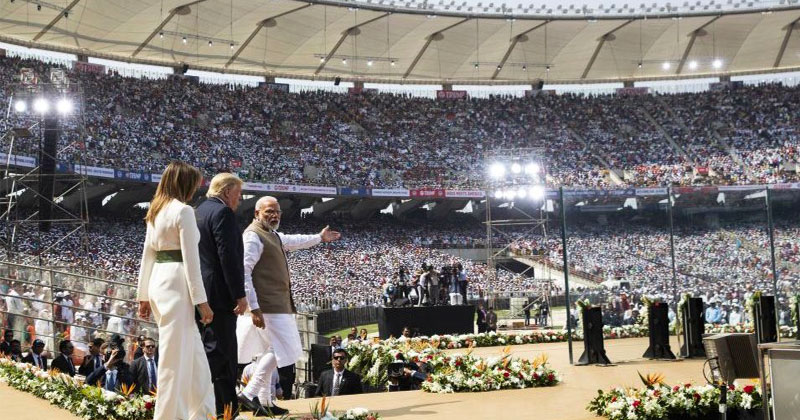 President Donald Trump received a stunning welcome in India Monday, as he visited the country to deliver the message, “America loves India.”

Addressing a crowd of over 110,000 at the Motera Stadium in Ahmedabad, President Trump joined Indian Prime Minister Narendra Modi at a “Namaste Trump” rally meant to symbolize the strong ties between India and America.

“The felicitation event is called ‘Namaste Trump,'” the Prime Minister explained. “‘Namaste’ also has a very deep meaning. It is a word from one of the world’s oldest languages: Sanskrit. It signifies that we bow, not just to the individual, but also to the divinity within the person.”

Watch Prime Minister Modi introduce President Trump. Trump takes the stage in the video below at 11:00.


Footage ahead of the event showed throngs of Indians flooding the stadium where Trump was scheduled to speak.

One estimate claimed 7 million people were expected to line the streets as the president planned to drive his motorcade along a 22-mile stretch.

Footage from inside the venue showed a stadium packed to the brim of Indians eager to see the president whom some Indians actually celebrate with songs, prayers and statues.

125,000+ patriots in white Trump hats at Motera stadium erupted in huge cheer to welcome Trump as #NamasteTrump reverberates all around

Roar of appreciation when Donald Trump uses term "Islamic terrorism". Audience doesn't even wait for end of sentence, 2 words was enough for applause. Another round of applause when he speaks about elimination of Al Baghdadi. Silence when he mentions Pakistan #TrumpInIndia pic.twitter.com/GBeK5ho8sX

“The United States and India are also firmly united in our ironclad resolve to defend our citizens from the threat of radical Islamic terrorism,” the president said. “Both of our countries have been hurt by the pain and turmoil of terrorism and that terrorism brings under my administration we unleashed the full power of the American military on bloodthirsty killers of Isis in Iraq and in Syria.”

“America will always be faithful and loyal friends to the Indian people,” the president also told the crowd.