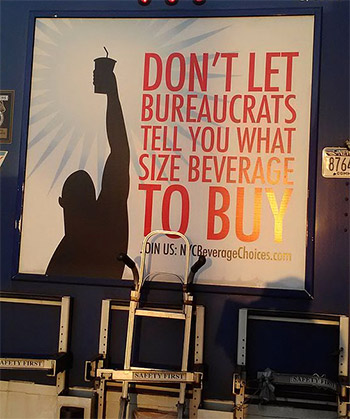 The New York Court of Appeals, the highest court in the state, has overturned a ban on the sale of large soda imposed at the behest of Michael Bloomberg in 2012, who said the law was a response to childhood obesity.

The court ruled the city of New York exceeded its authority when it restricted the size of drinks sold by street vendors, stadiums, movie theaters, restaurants and delis. The regulation limited drinks containing sugar to 16 ounces.

The ban did not apply to drinks sold in grocery stores, diet sodas, drinks with more than 70-percent fruit juice, or that contain alcohol.

Beverage companies, restaurants and movie theater owners sued the city, arguing it did not have the authority to impose the restrictions.

The ban was put in place by a health board appointed by then mayor Bloomberg. A roving restaurant inspection team was responsible for enforcing the law.

More than half of New York residents polled opposed the law.

In March, 2013 New York Supreme Court Judge Milton Tingling invalidated the law and in June of that year the New York City Department of Health and Mental Hygiene went to court to fight the ruling.

The following month, an appeals court ruled against the ban, stating the health board “failed to act within the bounds of its lawfully delegated authority”