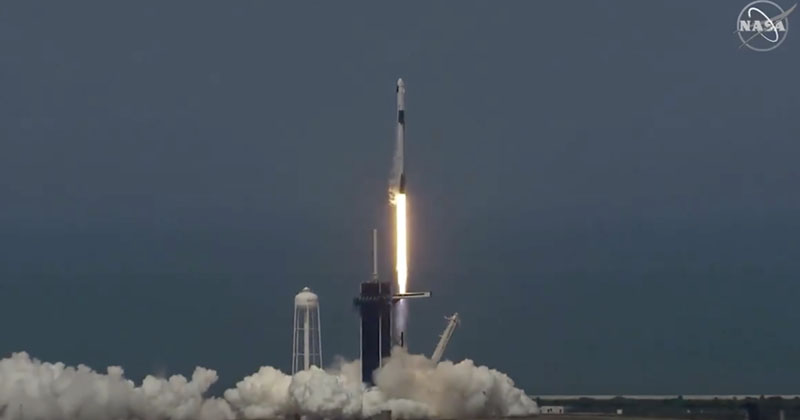 At precisely 3:22pm ET, SpaceX’s NASA Flight launched successfully from Cape Canaveral, marking the first NASA crew bound for orbit from the US in 9 years, heralding a new era in human spaceflight and forging a new landmark for NASA and Elon Musk.

We have liftoff. History is made as @NASA_Astronauts launch from @NASAKennedy for the first time in nine years on the @SpaceX Crew Dragon: pic.twitter.com/alX1t1JBAt

Trump and Pence were both present at the lift off, which saw astronauts Bob Behnken and Doug Hurley separated from the rocket booster roughly 12 minutes into the flight.

The view with @POTUS and @VP. pic.twitter.com/kv5vRNFSWQ

NASA was live tweeting the launch:

We have liftoff. History is made as @NASA_Astronauts launch from @NASAKennedy for the first time in nine years on the @SpaceX Crew Dragon: pic.twitter.com/alX1t1JBAt

Stage 1 entry burn has started. The #LaunchAmerica crew is heading into orbit. pic.twitter.com/aJUAdj4OC9

Falcon 9 booster has landed on the Of Course I Still Love You droneship! pic.twitter.com/96Nd3vsrT2

The Dragon capsule will next deliver Behnken and Hurley to the International Space Station – the first time American astronauts have flown from U.S. soil since the space shuttle program ended in 2011. The launch comes 18 years after Musk founded Space Exploration Technologies Corp. with the ultimate goal of populating other planets.

The biggest U.S. rocket launch in decades captured interest around the globe, coming at a time people clamored for good news amid the Covid-19 pandemic and economic uncertainty.

Despite the threat of more thunderstorms, SpaceX and NASA are preparing for today’s historic attempt to launch astronauts into space, via a private company. This comes several days after NASA “scrubbed” the first attempt due to weather-related issues and one day after SpaceX’s Starship prototype blew up on a Texas launch pad.

“We are moving forward with the launch today,” NASA Administrator Jim Bridenstine tweeted Saturday morning. “Weather challenges remain with a 50% chance of cancellation.”

SpaceX and NASA administrators are carefully monitoring today’s evolving weather situation around the launch site. As of 11:37 ET, there’s a weather disturbance off the coast and could arrive inland around 14:00 to 16:00 ET, right around the time of launch.

At 7:51 ET, SpaceX tweeted “all systems go,” along with an up-close photo of the Crew Dragon atop the Falcon 9 rocket.

All systems go for Crew Dragon’s test flight with @NASA astronauts @AstroBehnken and @Astro_Doug. Teams are keeping an eye on weather. Webcast will go live at ~11:00 a.m. EDT → https://t.co/bJFjLCilmc pic.twitter.com/AXDGNfqv0K

As per the Launch Mission Execution Forecast:

“On Sunday, the late season frontal boundary will provide some added cloudiness over the Spaceport early, but will likely push just south of the area by T-0. The primary weather concerns for launch are flight through precipitation, the thick cloud layer rule, and the cumulus cloud rule, associated with the frontal boundary,” NASA’s launch report said.

The report went on to say Sunday’s launch window would be at 60% and 70% chance for Tuesday, suggesting more favorable odds of launching would be seen in the week ahead.

Astronauts Doug Hurley and Bob Behnken will be on the Crew Dragon mission, which would be the first manned rocket launch from US soil since the space shuttle program ended in 2011. Both President Donald Trump and Vice President Mike Pence will be in attendance at today’s launch event.

Bridenstine tweeted, “Best selfie ever!” as he stands in front of Hurley and Behnken.

NASA will stream the launch event live on YouTube

Today’s launch comes one day after SpaceX’s Starship SN4 prototype blew up on its test stand in Boca Chica, Texas. It doesn’t produce a vote of confidence for the Crew Dragon launch.

Last week, the morning before the first launch attempt, Elon Musk, the majority owner of SpaceX, holding about 54% of the private company, said: “I’m Chief Engineer of the thing. If it goes right, it’s a credit to the SpaceX/NASA team. Goes wrong, it’s my fault.”

“I’m Chief Engineer of the thing. If it goes right, it’s credit to the SpaceX/NASA team. Goes wrong, it’s my fault.” — @elonmusk

Trump Supporters in Cocoa Beach Florida held a flag-waiving and “honk for Trump” in front of the World Famous Ron Jon Surf Shop on the day of the historic Launch America mission putting Americans back into space.