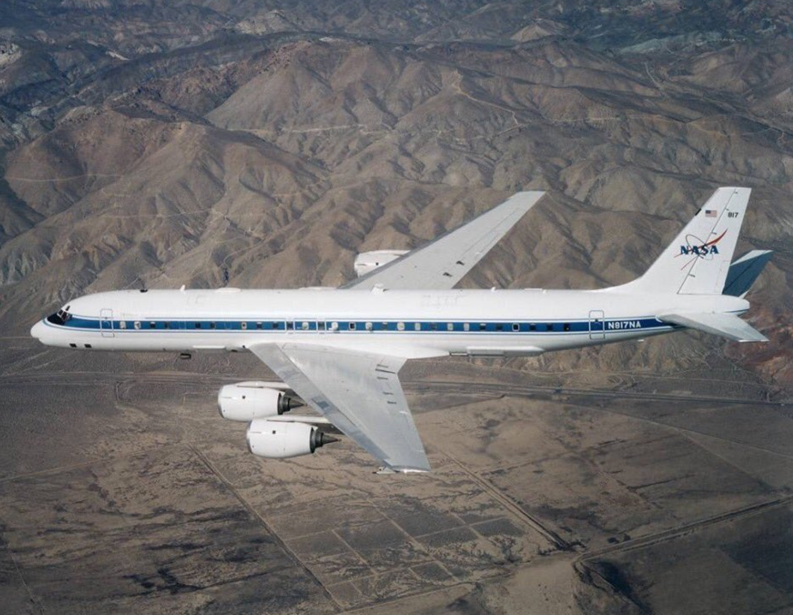 NASA appears to have flown a Douglas DC-8 observation plane, packed with scientific equipment, over the San Andreas fault, a tectonic boundary that extends 745 miles through California.

The plane was spotted flying extremely low to the ground over Altadena and Southern California on July 22, several weeks after California’s Searles Valley was struck with a magnitude 6.4 and 7.1 within 24 hours around July 4/5.

NASA spokeswoman, Kate Squires, told CBS Los Angeles (CBSLA) that the plane was conducting a mission to study the effects of fire smoke on air quality. However, conspiracy theory-websites don’t buy the government’s explanation of why the aircraft was zig-zagging over the faultline.

The facilities used to house migrants were set up under Obama and are meant to be used on the public as well.

Los Angeles County Sheriff’s Department said the plane, with call sign NASA817, took off from Palmdale Regional Airport, an airport in Palmdale, California, before flying 2,000 miles over Central California and Nevada and then landing at Boise Airport, Idaho.

Low flying plane over Altadena and Southern California today. It just passed along the foothills a few minutes ago. We have been told the plane belongs to NASA.

Plane is a DC-8 with a call sign of NASA817#LASD #altadena #NASA pic.twitter.com/CBqDR4WW7T

The Metro reported Californians were startled by the plane because it was flying at such a low altitude.

“It was scary, a little bit. You didn’t know if was going to land,” CBSLA reporter Jasmine Viel, who was commuting when the plane flew over her, said.

“Everyone kind of stopped in their cars, looking up. It was big and loud.”

Conspiracy websites point to the planes flight path, appears to have followed some parts of the San Andreas fault.

Secureteam10’s Tyler Glockner suggested in a video that the plane was monitoring seismic activity across the fault. Glockner said the government could be gearing up for the next big earthquake.

“A registered NASA aircraft was noticed doing zig-zag flying patterns near and over the San Andreas fault line,” he said in the clip.

“It’s almost as if it is scanning the ground as if to try and get more data about what is happening underneath. What is going on? Is something occurring? What do they know, are they gearing up for something? Do they know the Big One is coming?”

Conspiracy site allnewspipeline.com said the plane’s activity suggests NASA and the US government are hiding something from the public.

One Twitter user the plane is “possibly scanning for data and information about the new supervolcano that is slowly forming in Southern California.”

And possibly the US government is preparing for a nuclear disaster in Southern California because if the next big earthquake strikes, there are currently five nuclear reactors right along the fault.

A Natural News investigation into the geolocation of nuclear power facilities in California reveals that five nuclear facilities were built in close proximity to the San Andreas fault line, with some constructed right in the middle of earthquake zones that have up to a 50% chance of a severe earthquake every 30 years.

One nuclear power plant – the Diablo Canyon Nuclear Power Plant which produces 2,160 megawatts — was constructed on the coast, making it extremely vulnerable to the very same kind of ocean water surge that destroyed the Fukushima-Daiichi facility which suffered a 2011 meltdown in Japan.

So what exactly is the US government preparing for in Southern California? Is it the next big earthquake that could spark a nuclear disaster?