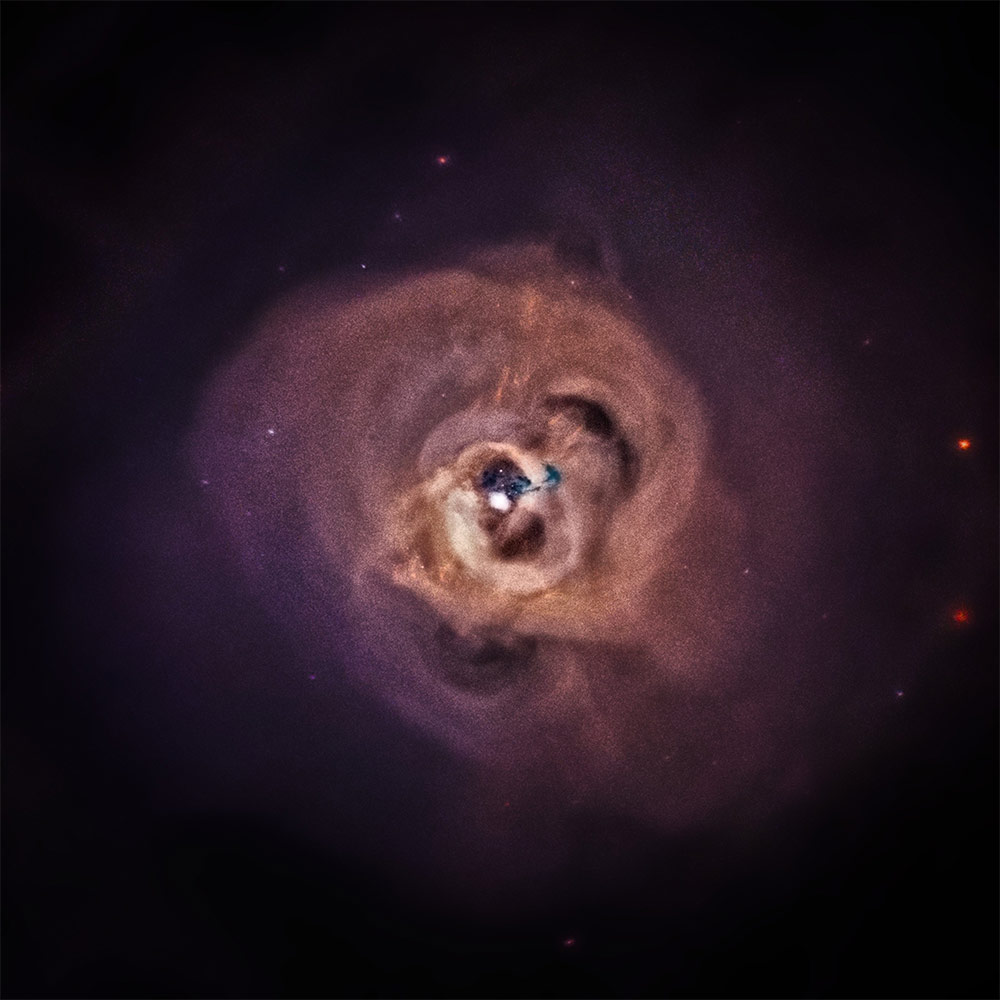 A mysterious X-ray signal has been found in a detailed study of galaxy clusters using NASA’s Chandra X-ray Observatory and ESA’s XMM-Newton. One intriguing possibility is that the X-rays are produced by the decay of sterile neutrinos, a type of particle that has been proposed as a candidate for dark matter.

While holding exciting potential, these results must be confirmed with additional data to rule out other explanations and determine whether it is plausible that dark matter has been observed.

Astronomers think dark matter constitutes 85% of the matter in the Universe, but does not emit or absorb light like “normal” matter such as protons, neutrons and electrons that make up the familiar elements observed in planets, stars, and galaxies. Because of this, scientists must use indirect methods to search for clues about dark matter.

“We know that the dark matter explanation is a long shot, but the pay-off would be huge if we’re right,” said Esra Bulbul of the Harvard-Smithsonian Center for Astrophysics (CfA) in Cambridge, Mass. who led the study. “So we’re going to keep testing this interpretation and see where it takes us.”

The authors suggest this emission line could be a signature from the decay of a “sterile neutrino.” Sterile neutrinos are a hypothetical type of neutrino that is predicted to interact with normal matter only via gravity. Some scientists have proposed that sterile neutrinos may at least partially explain dark matter.

“We have a lot of work to do before we can claim, with any confidence, that we’ve found sterile neutrinos,” said Maxim Markevitch, a co-author from NASA’s Goddard Space Flight Center in Greenbelt, Maryland. “But just the possibility of finding them has us very excited.”

One source of uncertainty is that the detection of this emission line is pushing the capabilities of the two observatories in terms of sensitivity. Also, there may be explanations other than sterile neutrinos if this X-ray emission line is deemed to be real. There are ways that normal matter in the cluster could have produced the line, although the team’s analysis suggested that all of these would involve unlikely changes to our understanding of physical conditions in the galaxy cluster or the details of the atomic physics of extremely hot gases.

The authors note that even if the sterile neutrino interpretation is correct, their detection does not necessarily imply that all of dark matter is composed of these particles.

“Our next step is to combine data from Chandra and JAXA’s Suzaku mission for a large number of galaxy clusters to see if we find the same X-ray signal,” said co-author Adam Foster, also of CfA. “There are lots of ideas out there about what these data could represent. We may not know for certain until Astro-H launches, with a new type of X-ray detector that will be able to measure the line with more precision than currently possible.”

Because of the tantalizing potential of these results, after submitting to The Astrophysical Journal the authors posted a copy of the paper to a publicly accessible database, arXiv. This forum allows scientists to examine a paper prior to its acceptance into a peer-reviewed journal. The paper ignited a flurry of activity, with 55 new papers having already cited this work, mostly involving theories discussing the emission line as possible evidence for dark matter. Some of the papers explore the sterile neutrino interpretation, but others suggest different types of candidate dark matter particles, such as the axion, may have been detected.

Only a week after Bulbul et al. placed their paper on the arXiv, a different group, led by Alexey Boyarsky of Leiden University in the Netherlands, placed a paper on the arXiv reporting evidence for an emission line at the same energy in XMM-Newton observations of the galaxy M31 and the outskirts of the Perseus cluster.  This strengthens the evidence that the emission line is real and not an instrumental artifact.

The paper describing the new Chandra and XMM-Newton observations appears in the June 20, 2014 issue of The Astrophysical Journal. NASA’s Marshall Space Flight Center in Huntsville, Ala., manages the Chandra program for NASA’s Science Mission Directorate in Washington. The Smithsonian Astrophysical Observatory in Cambridge, Mass., controls Chandra’s science and flight operations.