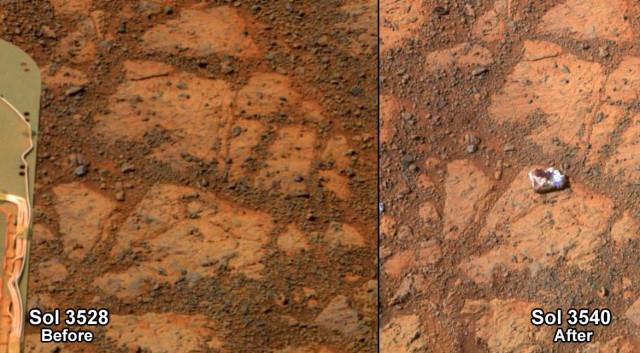 A particularly litigious American, Rhawn Joseph, is suing NASA for failing to investigate an object, discovered by the Opportunity rover on Mars, that he claims is evidence of alien life. NASA, who has looked at the object with Opportunity’s microscope, says the object is — drum roll please — a rock. Joseph’s lawsuit claims that the object is a living thing that “germinated from spores,” and thus NASA should be compelled to take hundreds of photos from multiple angles, and then send the original photos to Joseph for investigation. Who will blink first? (Hint: Probably not NASA.)

Now, to be fair, the object — named Pinnacle Island by NASA — is fairly extraordinary. On Sol 3528 (Opportunity’s 3528th Martian day), the object was nowhere to be seen. 12 days later, on Sol 3540, Pinnacle Island appeared. According to NASA, the object “looks like a jelly donut, white around the outside, red in the middle,” with the red hue being described as a ”weird deep red color, not a Martian kind of red.” NASA has looked at the object with Opportunity’s microscope and decided that it is “clearly a rock.”

As for how the rock got there, NASA gives us two options: 1) The rock was dislodged by the rover’s maneuvering, or 2) The rock was thrown out by a nearby meteorite impact. The first option is much, much more likely says NASA. ”We think that in the process of that wheel moving across the ground, we kind of flicked it, kind of tiddly winked it out of the ground and it moved to the location where we see it,” said NASA’s Steve Squyres. NASA thinks the rock’s odd coloring is due to the fact that it was flipped over; it may have been facing downwards for billions of years, unexposed to the Martian atmosphere.