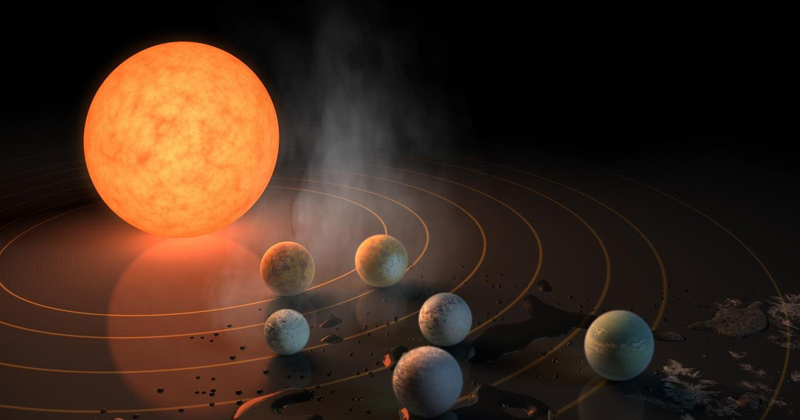 This month marks the third anniversary of the discovery of a remarkable system of seven planets known as TRAPPIST-1.

These seven rocky, Earth-size worlds orbit an ultra-cool star 39 light-years from Earth. Three of those planets are in the habitable zone, meaning they are at the right orbital distance to be warm enough for liquid water to exist on their surfaces. After its 2021 launch, NASA’s James Webb Space Telescope will observe those worlds with the goal of making the first detailed near-infrared study of the atmosphere of a habitable-zone planet.

To find signs of an atmosphere, astronomers will use a technique called transmission spectroscopy. They observe the host star while the planet is crossing the face of the star, known as a transit. The light of the star filters through the planet’s atmosphere, which absorbs some of the starlight and leaves telltale fingerprints in the star’s spectrum.

Finding an atmosphere around a rocky exoplanet—the word scientists use for planets beyond our solar system—won’t be easy. Their atmospheres are more compact than those of gas giants, while their smaller size means they intercept less of the star’s light. TRAPPIST-1 is one of the best available targets for Webb since the star itself is also quite small, meaning the planets’ size relative to the star is larger.

“The atmospheres are harder to detect but the reward is higher. It would be very exciting to make the first detection of an atmosphere on an Earth-sized planet,” said David Lafrenière of the University of Montreal, principal investigator on one of the teams examining TRAPPIST-1.

Red dwarf stars like TRAPPIST-1 tend to have violent outbursts that could make the TRAPPIST-1 planets inhospitable. But determining whether they have atmospheres, and if so, what they’re made of, is the next step to finding out whether life as we know it could survive on these distant worlds.

More than one team of astronomers will study the TRAPPIST-1 system with Webb. They plan to use a variety of instruments and observing modes to tease out as many details as they can for each planet in the system.

“It’s a coordinated effort because no one team could do everything we wanted to do with the TRAPPIST-1 system. The level of cooperation has been really spectacular,” explained Nikole Lewis of Cornell University, the principal investigator on one of the teams.

“With seven planets to choose from, we can each have a piece of the cake,” added Lafrenière.

Lafrenière’s program will target TRAPPIST-1d and -1f in an effort to not only detect an atmosphere, but determine its basic composition. They expect to be able to distinguish between an atmosphere dominated by water vapor, or one composed mainly of nitrogen (like Earth) or carbon dioxide (like Mars and Venus).

Lewis’s program will observe TRAPPIST-1e with similar goals. TRAPPIST-1e is one of the planets beyond our solar system that has the most in common with Earth in terms of its density and the amount of radiation that it receives from its star. That makes it a great candidate for habitability—but scientists need to know more to find out.

A broad variety of planets

While the TRAPPIST-1 planets hold particular appeal from a standpoint of potential habitability, Lafrenière’s program will target a variety of planets—from rocky to mini-Neptunes to Jupiter-sized gas giants—at a variety of distances from their stars. The goal is to learn more about how, and where, these planets form.

In particular, astronomers continue to debate how gaseous planets can be found very close to their stars. Most believe that such a planet must have formed farther out in the protoplanetary disk—the disk around a star where planets are born—since more material is available far from the star, and then migrated inward. However, other scientists theorize that even large gas giants can form relatively close to their star.

“Also, maybe they formed farther out, but how much farther out?” asked Lewis.

To help inform the debate, astronomers will look at the ratio of carbon to oxygen in an assortment of exoplanets. This ratio can serve as a tracer of where a planet formed, because it varies with the distance from the star.

In addition to examining planets using transmission spectroscopy, the teams will also employ a technique known as a phase curve. This involves observing a planet over the course of an entire orbit, which is only practical for the hottest worlds with the shortest orbital periods.

A planet circling its star very close becomes tidally locked, meaning that it always shows the same face to the star, as the Moon does to Earth. As a result, distant observers watching the planet will see it go through various phases, since different sides of the planet are visible at different points in its orbit.

By measuring the planet at various times, astronomers can build up a map of the atmospheric temperature as a function of longitude. This technique was pioneered by NASA’s Spitzer Space Telescope, which made the first “weather map” of an exoplanet in 2007.

In addition, by observing the planet’s own heat emission, astronomers can model the atmosphere’s vertical structure.

“With a phase curve, we can build a complete 3-D model of a planet’s atmosphere,” explained Lafrenière.

This work is being conducted as part of a Webb Guaranteed Time Observations (GTO) program. This program is designed to reward scientists who helped develop the key hardware and software components or technical and interdisciplinary knowledge for the observatory.

Alex Jones breaks down how Pelosi’s bizarre behavior during the State of the Union address is a sign that the Democratic Party is dying.