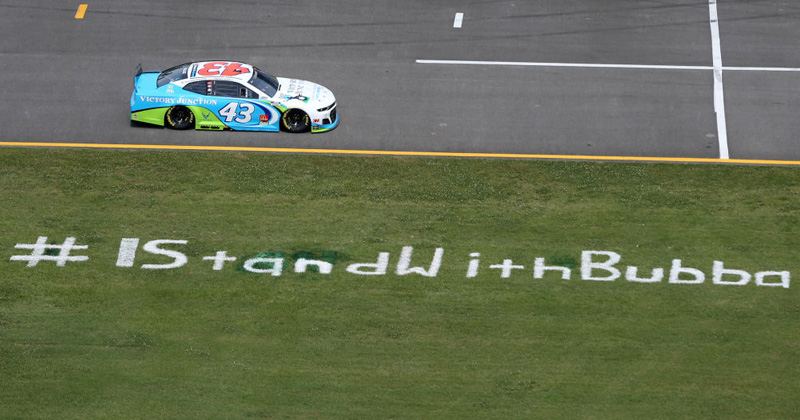 An FBI investigation has revealed NASCAR racer Bubba Wallace was never the victim of a hate crime after a rope used to pull garage doors shut was mistaken for a noose.

The incident took place just weeks after Wallace called for the Confederate flag to be banned from NASCAR events, which the company did two days later.

After the “noose” was found in his garage at Talladega Superspeedway on Sunday, Wallace went to twitter to condemn the “despicable act of racism.”

The next day, after racing in the Geico 500, Wallace took off his American flag face mask he’s been wearing over the past few weeks.

“The sport is changing,” he said. “The deal that happened yesterday, sorry I’m not wearing my mask, but I wanted to show whoever it was that you’re not gonna take away my smile.”

"The sport is changing … Whoever it was, you're not gonna take away my smile."@BubbaWallace with powerful words the day after a noose was found in his garage stall at Talladega. pic.twitter.com/Wl2aqGk59a

Before the race, Wallace’s fellow NASCAR racers stood in solidarity by pushing his car down pit row.

Imagine becoming a star in your industry overnight like @BubbaWallace because of an obvious hoax. Has CNN issued a retraction yet for perpetuating another fake news story? pic.twitter.com/L2AbT18DT2

Many people immediately questioned whether a noose was really placed in the garage or if some type of Jussie Smollet hate crime hoax was again being pushed on the American public.

Conservative commentator Mark Dice uploaded a video suggesting the “noose” could have been a garage pull rope seen in footage of Talladega Superspeedway uploaded to the official NASCAR YouTube channel.

Bubba is the "noose" just the basic garage door pull that's on some of the garage doors at the Talladega Speedway? pic.twitter.com/vC4iAQmqxM

Conservative comedians, the Hodge Twins, also predicted the alleged hate crime was a hoax in a video uploaded to Facebook.

A sportswriter for a local news outlet out of St. Louis defended Wallace by claiming he “never saw” the noose and was only told about it by his crew.

You're better than this, man. Bubba was told there was a noose. He never saw it. He never reported it. He was told it existed and reacted. Don't go equating this to Jussie, when researching would land you at a more reasonable explanation for how it happened.

Only one day later, skeptics were proven right after an FBI investigation determined the “noose” was in-fact the garage pull seen in the video posted by Mark Dice.

After a thorough investigation, the agency declared, “no federal crime was committed,” explaining the garage pull has been in that exact location since October of 2019.

“We offer our thanks to NASCAR, Mr. Wallace, and everyone who cooperated with this investigation,” they concluded.

BREAKING: DOJ and FBI release a statement saying that the noose found in NASCAR driver Bubba Wallace's garage was not planted and had been there since 2019 and that no federal crimes were committed pic.twitter.com/lufSRWr62w

Following the release of the FBI’s findings, NASCAR put out its own statement, reading, “Bubba Wallace was not the victim of a hate crime… the garage door pull rope fashioned like a noose had been there since as early as last fall.”

Jussie Smollett has been indicted for a second time after evidence came out that he allegedly staged his own hate crime. As the police, the original prosecutor that dropped his charges and his own friends turning against him, will justice finally be served toward the man who tried to frame Trump supporters?