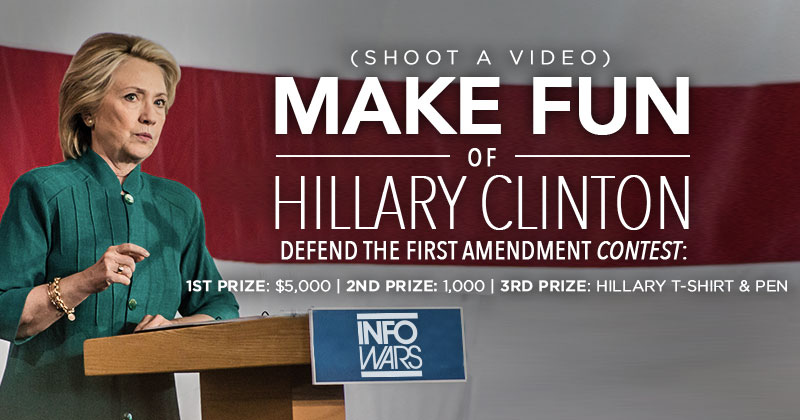 Hillary Clinton is now attacking free speech after comedians made fun of her!

She’s trying to censor comedy skits that poked fun at her produced by the Laugh Factory in Los Angeles, Calif.

“They threatened me,” club owner JamieMasada told Judicial Watch. “I have received complains before but never a call like this, threatening to put me out of business if I don’t cut the video.”

Hillary, however, had no problem joking about Muammar Gaddafi being assassinated by Western-backed rebels.

It’s outrageous that a presidential candidate is opening violating the First Amendment by trying to get a comedy club shut down for simply making fun of her, especially since candidates, including Bernie Sanders and Donald Trump, routinely get hammered by comedians.

So, in response to these attack on free speech, we’re launching the Make Fun of Hillary, Defend the First Amendment Contest.

We want the funniest, most outrageous satire and comedy guaranteed to make Hillary’s blood boil.

— The video must be about Hillary Clinton.
— No more than 5 (five) minutes long
— Video must be comedy or satire
— Must put infowars.com in the YouTube title
— All work must be free of copyright issues. If requested by Infowars, you must provide detailed information regarding the source, creator and background information of your work. If you utilize any 3rd party materials, such as music, you must provide license and/or consent forms to Infowars upon request. Any news clips used must be short and clearly fair use.
— Videos must be in English or subtitled in English
— It is important to place Infowars.com tastefully into your production.
— The majority of the Content must be newly created and previously unpublished
— Multiple unique submissions are allowed and encouraged
— Infowars and Alex Jones will determine the final winners
— If the entry contains adult content a 10-second viewer discretion advised disclaimer is required
— All entries must be uploaded to YouTube and link sent to: [email protected]

— If a collaborative effort, one person must enter
— Contestants must be over 18. Minors wishing to participate must present a signed waiver from parent/legal guardian
— Residents of Belarus, Burma/Myanmar, Cuba, Iran, Libya, North Korea, Somalia, Sudan, Syria and Zimbabwe, or to other individuals restricted by U.S. export controls and sanctions are ineligible for Cash Prize.

Do I have to sign up, register or complete a form to enter?

No. Simply complete your video (look at the Requirements for details of what is required for the video), upload to YouTube and send us the link.

We strongly suggest you review what constitutes Fair Use. News clips, subject to fair use, may be used however bear in mind that the length of the clip used is a key factor in determining fair use. Long clips are also not good editing practice when trying to make your content compelling.

Video title must include the website (http://www.infowars.com). Please read contest rules carefully for other requirements or e-mail [email protected] with your questions.

New content is a requirement for winning a cash prize.

Below are some of the latest entries:

Hillary Clinton – I think I am American

Hillary Clinton: The Wicked Witch of the West Wing