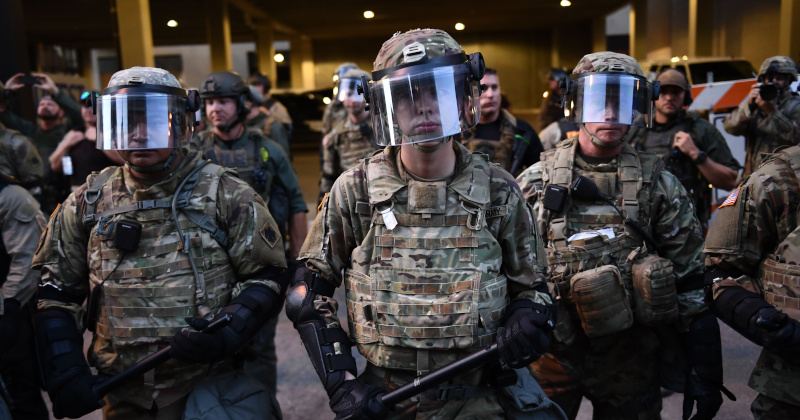 Some 400 National Guard troops have been activated in the nation’s capital to protect historical monuments from vandalism, following a failed attempt by protesters to topple a statue of Andrew Jackson near the White House.

The guardsmen, who would be unarmed if deployed, were placed on standby Wednesday afternoon as heated demonstrations against police brutality and racism rage on around the country, driving calls for the removal of statues and monuments protesters see as celebrating slavery and other historical abuses.

“The District of Columbia National Guard has sent unarmed troops to guard monuments and other infrastructure in support of local law enforcement agencies,” said Craig Clapper, spokesperson for the DC National Guard.

The 400 troops have not yet been moved into the streets and remain in the National Guard Armory in the capital but, if needed, will be deployed to aid the DC Park Police at “key monuments to prevent any defacing or destruction.”

On Monday night, protesters tried to tear down a statue of former president Andrew Jackson in Lafayette Park outside the White House; they associate him with the brutal forced relocation of Native Americans in the mid-1800s, among other criticisms.

Though the demonstrators only succeeded in defacing the statue, fears that they will try again have prompted a heavier police presence around monuments in the capital, where a statue of Confederate general Albert Pike was also toppled last week.

After protesters gathered outside the Emancipation Monument in DC’s Lincoln Park on Tuesday, one organizer declared his group’s plans to rip down the statue on Thursday at 7pm. The advance warning has driven speculation that some activists would like to see a confrontation with police or counter protesters, giving them ample notice for the event.

Make no mistake about what these extremists are doing

Instead, they announce they'll do it in 2 days. Why?

They want counter protesters and cops to show up & they want all hell to break out on national tv https://t.co/CzlGXoKavQ


Guard troops were also activated in Wisconsin on Wednesday to protect property in the state capital after protesters successfully took down two statues the previous night, including one honoring an abolitionist Civil War colonel who’d fought for the Union.

Tuesday night saw intense street clashes in Madison, with protesters pitching a Molotov cocktail into a government building, setting fires and assaulting a state senator, before being repelled by police pepper spray. After surveying the damage in person, Governor Tony Evers offered a harsh rebuke to the protesters.

“If your goal was to advance social justice and policing reforms in the state of Wisconsin and making sure systemic racism is a thing of the past, you failed,” Evers said, adding that he had activated the National Guard “to make sure people can exercise their First Amendment rights while ensuring the safety of members of the public and state buildings and infrastructure.”

Amid the wave of monument destruction sweeping the country, US President Donald Trump has vowed harsh penalties for vandals, authorizing federal authorities to impose sentences up to 10 years under the Veteran’s Memorial Protection act, insisting there would be “no exceptions.” He has also called on Congress to “do something” about protesters who burn American flags, demanding it “be stopped and now!”