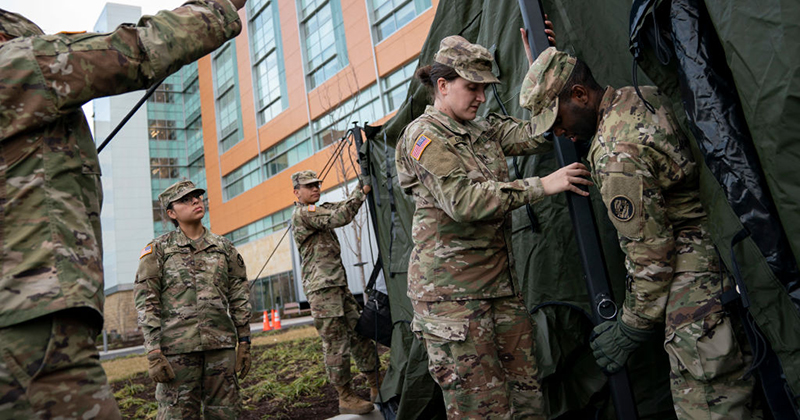 *  *  *
Update (2145ET): Earlier this week, the Military Times confirmed that some 2,000 national guard soldiers had been called up across 23 states, with more on the way.

This is one of the most important War Room broadcasts in the shows history. We open the phone lines for the entire show and get calls from military, law enforcement and other services who have important intel on what is being prepared for America behind the scenes. Interstate travel shutdown, shelter in place mandatory, what is going on behind the scenes. Powerful callers and discussion as we all measure what we are facing and what comes next in America. Can’t miss transmission.

In Baltimore, military vehicles were spotted on the street.

Military vehicles spotted in downtown Baltimore, near the stadiums… pic.twitter.com/YDwCUKJ51p

After thousands of Baltimorians violated a curfew imposed by Gov. Hogan as states around the country crack down on the outbreak.

Meanwhile, the second coronavirus death in Baltimore County (part of the suburbs north, east and west of the city) was confirmed about an hour ago, according to local media reports.

A second Marylander has lost his life as a result of the coronavirus pandemic. On behalf of our entire state, we send our heartfelt condolences to his family and to all those who loved him: pic.twitter.com/iq8nIqZBak

As states crack down around the country, with increasing legal penalties for people who put the public welfare at risk by venturing outdoors for no reason, or not taking the proper precautions, Baltimore appears to be readying for a crackdown as some residents steadfastly refuse to follow curfews.

“As the number of positive cases in Maryland continues to dramatically rise, we need everyone to take this seriously. This is a public health crisis like nothing we have ever faced before – we are all in this together, and we will get through this together,” Hogan said in a statement.

Rumors reported on social media and elsewhere have hinted at the possibility of more restrictive measures, and, in some cases, something closely approximating martial law, with the national guard deployed in the streets. Though, to be fair, that’s already the reality in New York, Maryland and nearly two dozen other states.

Update (1940ET): CTGN reports that China reported 41 new coronavirus cases on Friday, but for the second consecutive day, all of the cases were foreigners who allegedly contracted the virus abroad and carried it to China.

And for the third day in a row, no new cases were confirmed in Hubei Province.

Just in case you were curious how they did it…

On Friday, 41 new #COVID19 cases were reported on the Chinese mainland, all imported from abroad. With seven more deaths, the total number of deaths now stands at 3,255.

No new cases have been confirmed in #Hubei Province for three consecutive days. pic.twitter.com/R1keNLxLZo

…basically, President Xi harnessed the power of patriotic socialism, and led the valiant Chinese people to victory against the unseen, yet all-consuming foe. Around the world, more than 250k cases have been confirmed, and the WHO pointed out that it took more than three months to reach 100,000 cases worldwide, but only 12 days to log the next 100,000.

As millions of Americans panic about the possibility that their governor could hand down a ‘shelter in place’ order at any moment, across the country, panic buying continued on Friday. In Connecticut, where the outbreak in Westchester County has already started to bleed across the border into wealthy suburban Fairfield County, a haven for the Wall Street elite. A local news website reports that 53 cases have been confirmed in the town of Greenwich, one of the wealthiest zip codes in the country, and an area that’s virtually synonymous with wealth and privilege.

Too bad their neighbors closed that testing clinic.