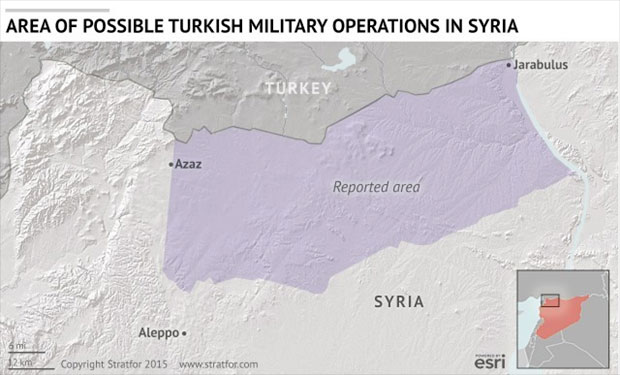 NATO boss Jens Stoltenberg said during a meeting of defense ministers in Brussels on Thursday the alliance is prepared to send ground troops to protect Turkey’s border with Syria.

“Nato is ready and able to defend all allies, including Turkey against any threats,” Stoltenberg said.

The move is in response to a claim by Turkey a Russian warplane violated its airspace last week.

According to McClatchy, however, the Russian jet did not violate Turkish airspace:

A Turkish security official said Turkish radar locked onto the Russian aircraft as it was bombing early Friday in al Yamdiyyah, a Syrian village directly on the Turkish border. He said Turkish fighter jets would have attacked had it crossed into Turkish airspace.

Turkey has maintained a buffer zone five miles inside Syria since June 2012, when a Syrian air defense missile shot down a Turkish fighter plane that had strayed into Syrian airspace. Under revised rules of engagement put in effect then, the Turkish air force would evaluate any target coming within five miles of the Turkish border as an enemy and act accordingly.

Earlier this week a leaked German intelligence document confirmed reports that Turkey is directly assisting Harakat Ahrar ash-Sham al-Islamiyya, a coalition of Islamist and Salafist units that have vowed to establish a Sunni Wahhabist state under Sharia law in Syria.

Ahrar ash-Sham is aligned with al-Nusra which has pledged allegiance to the Islamic State.

The Russians understand that Ahrar ash-Sham — currently the most powerful and effective jihadist group fighting in Syria — must be targeted if it hopes to turn back the effort to unseat Bashar al-Assad.

If NATO follows through on its promise to “defend all allies” by inserting troops in Turkey’s illegal “safe zone,” it will be effectively aiding and abetting the Islamic State.

In May declassified US Defense Intelligence Agency documents from 2012 revealed the United States and its partners in the Gulf states and Turkey supported the Islamic State and plan to establish a Salafist principality in Syria.