A U.S. Navy family is blaming their one-year-old’s brain and spine cancer on radiation from the crippled Fukushima nuclear power plant. 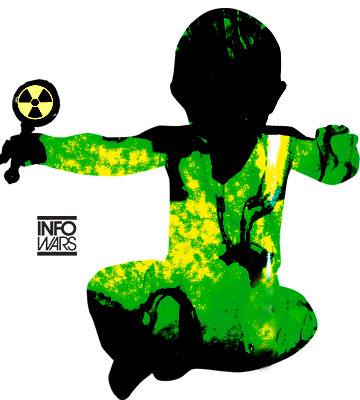 Since the 2011 meltdown, more than 50 U.S. sailors involved in the Navy’s Fukushima rescue efforts have been diagnosed with multiple forms of cancer.

According to Charles Bonner, an attorney representing dozens of the cancer-stricken sailors, Fukushima’s radiation is being passed onto his client’s children.

“This radiation not only hurts the young sailors, but it hurts their offsprings,” Bonner told Democracy Now.

Reading a declaration from the wife of one sailor, Bonner revealed how a one-year-old boy has already been devastated due to radiation exposure.

“My husband was exposed to radiation particles while assigned to the Seventh Fleet on the USS Ronald Reagan assisting in Operation Tomodachi beginning in March of 2011,” the declaration read. “As a result of this exposure, our son, who was born on November 14, 2012, at eight months was diagnosed with brain and spine cancer.”

Despite Fukushima’s clear connection to the deteriorating health of more than 100 U.S. military personnel, military leadership  continues to exclude radiation poisoning as a possibility.

According to radiation-decontamination officer Michael Sebourn, who was aboard the USS Ronald Reagan, sailors were exposed to “incredibly dangerous” radiation levels, reaching as high as 300 times above safe limits.

While multiple branches of the military deny any danger from Japan, the Pentagon has quietly ordered 75,000 packages of potassium iodide, admittedly due to radiation fears. Other agencies such as the Dept. of Health and Human Services have ordered a staggering 14 million doses as well.

Unfortunately, the children of military personnel exposed to Fukushima may not be the only ones at risk. A recent study from the Radiation and Public Health Project found that babies born in the western United States shortly after the disaster were 28 percent more likely to suffer from congenital hypothyroidism.

While many have shifted their focus to radiation in the Pacific Ocean, most recently discovered in California kelp, a new discovery in British Columbia suggests that airborne radiation is still an ongoing issue.

Given former MSNBC host Chenk Uygur’s comments regarding the media’s role in ignoring radiation reports not sanctioned by the U.S. government, a state-sponsored apology to Navy sailors seems unlikely.