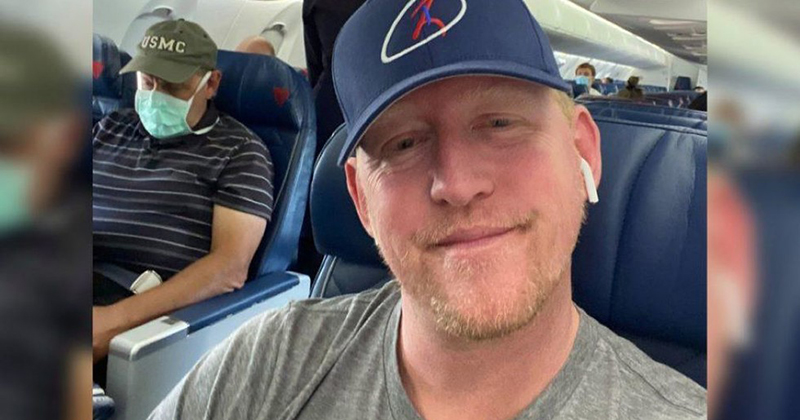 Robert J. O’Neill, the former US Navy Seal who claimed to have killed Osama Bin Laden, would have gotten away with going maskless on a Delta Air Lines flight, in defiance of social-distancing rules – if he hadn’t bragged about it.

“I just got banned from Delta for posting a picture,” O’Neill tweeted on Thursday. “Wow.”

I just got banned from @Delta for posting a picture. Wow.

The since-deleted picture, which O’Neill posted on Wednesday on Twitter, showed him sitting in his seat and smiling without wearing a face covering. The caption said, “I’m not a pu**y.”

Mask-wearers, who now wear masks while even walking in 100 degree heat, share that they refuse to stop wearing masks until there is a vaccine. Or maybe never.

His tweet on Wednesday led to a firestorm of controversy. One of the critics that struck a nerve with O’Neill was New York Times deputy editor Dan Saltzstein, who replied to the ex-Seal on Twitter: “You might just be (a pu**y) because you’re not willing to sacrifice and be a little uncomfortable for your fellow humans.” O’Neill later said: “I’m not willing to sacrifice? Come get some, NYT.”

I’m not willing to sacrifice? Come get some, NYT. NYT Deputy Editor Claims SEAL Who Says He Killed Bin Laden Is ‘Not Willing To Sacrifice’ For ‘Fellow Humans’ – The Daily Caller https://t.co/FAm42SyAKt

Another former Seal, Carl Higbie, came to O’Neill’s defense: “This is why the New York Times is failing. Rob, I know you would take a bullet for me and vice versa anytime – something the NYT reporters know nothing about. Because you didn’t have a mask on? Show me data that says masks stop spread.”

This is why the @nytimes is failing. Rob, i know you would take a bullet for me and vice versa anytime. Something the NYT reporters know nothing about.
Because you didn’t have a mask on??? Show me data that says mask stop spread… https://t.co/eh1xOVajG6 https://t.co/Ru34nebn0W

Saltzstein deleted his tweet, saying he had violated his own rule against name-calling.

I deleted a previous version of this tweet because I broke my own rule about name-calling. So let me try again: I honor O’Neill for his sacrifices to his country and his heroism. It’s sad that he can’t extend the same for the safety of his fellow passengers. pic.twitter.com/DxlUluIdX6

O’Neill told the Washington Post in a 2014 interview that he fired the shots that killed Bin Laden during the US raid on the Al-Qaeda leader’s compound in Pakistan in May 2011. He had previously told the same story anonymously to Esquire magazine in 2012, the year he retired from the Seals.

Another member of Seal Team Six, Matt Bissonnette, had claimed in a 2012 book that he fired the fatal shots. O’Neill later got his own book deal, writing ‘The Operator: Firing the Shots That Killed Osama Bin Laden,’ which was published in 2017.

Both men violated a Seals code of silence that typically precludes them from publicly talking about their missions.