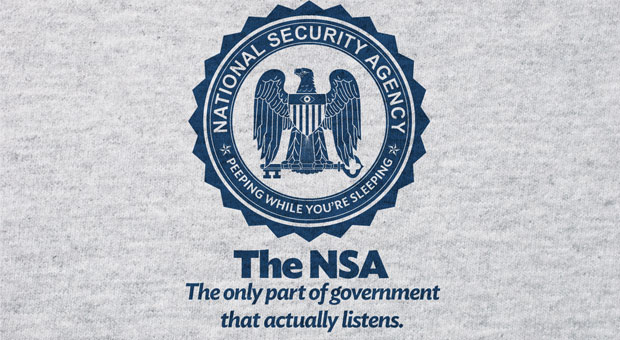 It took nearly three years for the NSA and the DHS to get the joke. The good news is that people like Dan McCall from LibertyManiacs.com is once again free to parody the two agencies, more than 2-1/2 years after being hit with C&Ds from both agencies for “misusing” their logos.

Today, the National Security Agency (NSA) and the Department of Homeland Security (DHS) are acknowledging that merchants who use images and names of the government agencies on parody merchandise are not in violation of any federal laws.

The admission settles a lawsuit Public Citizen filed against the agencies on behalf of Minnesota activist Dan McCall. Public Citizen argued that McCall has a First Amendment right to sell parody merchandise using the NSA and DHS seals.

“This is an important win,” said Paul Levy, the Public Citizen attorney representing McCall. “Citizens shouldn’t have to worry whether criticizing government agencies will get them in trouble or not. This settlement proves the First Amendment is there to protect citizens’ rights to free speech.”

The C&Ds were issued in 2011. The first one, from the NSA, arrived in March. Someone must have told the DHS that it too was being mocked because it sent its own C&D a few months later. Paul Levy of Public Citizen went to bat for Dan McCall, filing for declaratory relief because issuing C&Ds over parodies is generally considered to be a stupid idea, especially when the plaintiffs attempt to use federal law to stifle speech.

With the host of McCall’s merchandise, Zazzle, being at least as complicit in this debacle, Levy’s settlement takes care to address future issues with two pre-written letters that the agencies will sign and send to the company that folded oh-so-willingly three years ago. In addition to the two agencies admitting they were wrong and that the statutes quoted in the C&Ds don’t actually mean what they said they mean, there are instructions for Zazzle to “review” its users’ content in light of this ruling.

While full concession from the government agencies is nice, one wishes they would have been a little more willing to take a joke rather than become the joke themselves with their C&D notices. Fortunately, McCall has been cleared to return to his mockery of uptight government agencies, something he should have never been forced to give up. And Zazzle needs to do a bit more to protect users of its service. A baseless C&D is only as powerful as the host allows it to be and Zazzle played government doormat to the detriment of McCall’s business. That’s unacceptable.