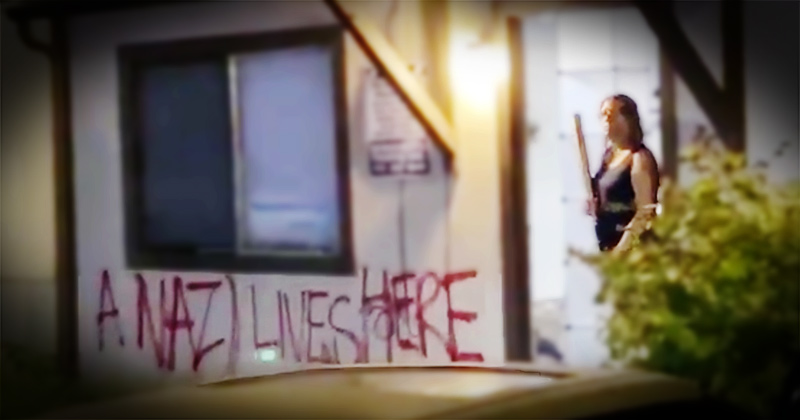 Citizens of Portland, Oregon stood up for their neighbor after she went viral for wearing a Nazi armband as a large group of Antifa rioters assaulted her and pointed lasers in her face.

On Wednesday night, the woman was accosted outside her house by a group of communists who directed multiple lasers towards her eyes, assaulted her and tried to rip her swastika armband off.

The lasers protesters used have injured multiple police officers already, and regardless of her Nazi apparel, did she deserve to be assaulted on the steps of her own home?

After #antifa were dispersed by police following the attack on the East Precinct, they tried to blind a woman at her home with lasers and attacked her.

Antifa have gone into residential parts of the city after moving on from attacking federal courthouse. pic.twitter.com/mKcrgHixmC

After the footage made its rounds on the internet, rioters arrived at the woman’s house again on Thursday night.

“A Nazi lives here” was spray-painted on the front of the home, and the woman stood in her doorway holding a baseball bat.

A group of neighbors argued with the rioters and threw an object at them, yelling, “I don’t give a fuck! Kids live next door and you’re doing some stupid shit like this? What the fuck’s wrong with you bro?”

Protestors came back to the house of the woman who wore a nazi armband yesterday, neighborhs came out to tell protestors to back off and this was their neighborhood pic.twitter.com/GDDVjknLT2

After attacking the Portland Police east precinct, #antifa militants return to the home of the woman they tried to blind with lasers yesterday. They vandalize the property. #PortlandRiots pic.twitter.com/GXaIyYRSeJ

In an interview, one of the neighbors explained the woman may be a racist, but that it’s not right for the mob to attack her and her property over her views.

“Realistically, all lives matter,” the man said. “I live here and I’m gonna protect my land.”

Referring to the woman’s Nazi armband, the neighbor said, “I don’t agree with her, but I’m not going to allow anyone to be an asshole.”

During the interview, neighbors in the background, who happen to be black, can be heard arguing with Antifa rioters who claim the neighbors are “sticking up for Nazis.”

Robert johns, lives next door and was part of the neighbors that told protestors to go away, whatever his neighbors beliefs are pic.twitter.com/LuJAy1wTgL

Two other women were assaulted by the Portland rioters on Thursday night when they tried to stop the group from setting the East Portland Police Precinct on fire.

One woman was doused in a white substance, likely paint, and another was assaulted when she tried to put out a fire in a dumpster by using a fire extinguisher.