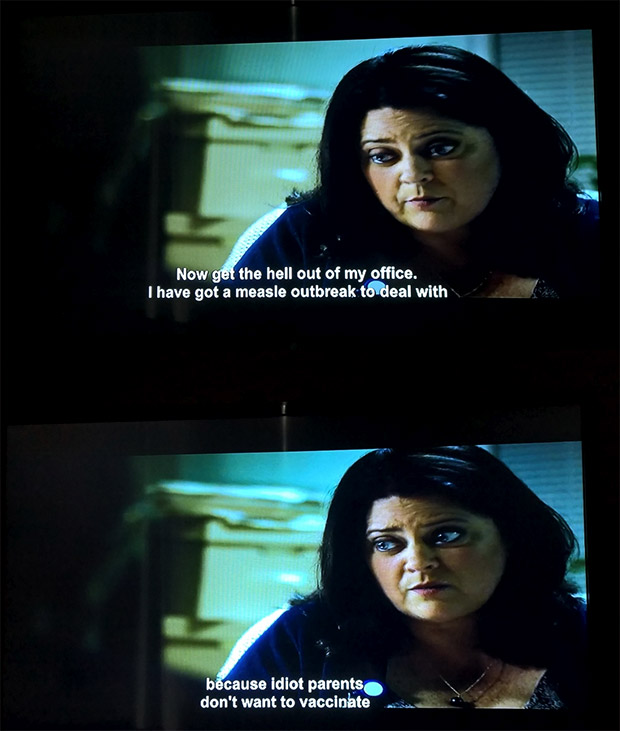 The ultra-violent web TV show, released earlier this month, follows the exploits of the fictitious Matt Murdock, a blind lawyer from New York City’s Hell’s Kitchen who practices law by day and pursues his own brand of justice by night.

Disturbingly, at least one episode in the series contains dialogue geared to propagandize its audience and at the same time mock and shame parents who are understandably skeptical of the efficacy of certain vaccines.

The series’ third episode, entitled Rabbit in a Snowstorm, features a conversation between two characters, one of whom is a doctor.

After filling out a form, the doctor requests the other character leave her office immediately because she has measles patients to attend to.

“Now get the hell out of my office,” the doctor says. “I have got a measles outbreak to deal with because idiot parents don’t want to vaccinate…”

Many will recall Marvel Entertainment was acquired by The Walt Disney Company in 2009.

Coincidentally, the company’s Disneyland resort was the site of the 2014 measles “outbreak,” which ultimately led to 133 cases across the US, 43 of which were Disney-related. Of those theme park cases, five people were found to have been fully immunized.

The establishment media was later forced to admit “a lesser-known aspect of the measles vaccine: That even those who get the shots have a small risk of getting sick, especially older people who were immunized in the 1960s, ’70s and ’80s,” according to the Los Angeles Times.

Disney went on in January to urge unvaccinated people to abstain from visiting their parks.

The timing of Daredevil’s completion date and the Disney outbreak is also interesting.

The series wrapped up production on December 21, according to a tweet sent out by Executive Producer Steven DeKnight.

Thanks to the cast and crew for an amazing experience directing the season finale of #Daredevil. Goodby, NYC. Peace and love!

The Disney outbreak occurred around the 28th of December, with the CDC reporting that initial cases stemmed from visits to the park between the 17th and 20th.

Could Daredevil have predicted the latest measles outbreak, as the timing between the outbreak and show’s wrap up suggest?

Probably not; multiple outbreaks have occurred across the US since 2011, according to the CDC.

What the show’s reference does coincide with is the massive vaccine indoctrination campaign being thrust on the American people by the federal government, in cahoots with the pharmaceutical industry and its partner corporations.

“…[A]s of December 14, 2014 there have been 6,962 serious adverse events reported to the Vaccine Adverse Events Reporting System (VAERS) in connection with measles vaccine since 1990, with over half of those occurring in children three years old and under,” reports the National Vaccine Information Center. “Of these events 329 were deaths, with over half of the deaths occurring in children under three years of age.”

The subtle, but vitriolic jab toward those who challenge the establishment is also nothing new from Marvel.

In 2010, notably after its acquisition by Disney, Marvel had to apologize when an issue of its Captain America comic book featured the beloved protagonist confronting racist members of the Tea Party movement, whom Cap encountered while “investigating a right-wing, anti-government militia group called ‘the Watchdogs,’” reported Yahoo! News.

With everyone from Obama to Elmo the muppet urging vaccinations, it’s evident a coordinated effort has been launched to goad, shame and brainwash people into getting vaccinated without question.

Recently measles and the subject of vaccine exemptions also made an appearance in an episode of NBC’s Law and Order:

“What is clear is that Law and Order, NBC, ABC, and any other network who receives vaccine manufacturer money continue to base their entire approach around the false idea of herd immunity,” writes journalist and researcher Jeffrey Jaxen.

“What will never be mentioned in any television news debate or paid behavior placement is the warnings listed the vaccine insert, the vaccine makers and doctors government granted immunity from any damages caused by the vaccines, violation of the Nuremburg Codes, other countries halting the vaccines due to damages, what the toxic vaccine ingredients do to the human brain, or that there are no trials that have shown vaccine safety for children, adults, pregnant women. These questions pull back the curtain and lead to real debate and questions outside the appeal to emotion; televisions only tool to form your opinions.”

WATCH: The vaccine debate makes its way through your television set. Disney, who owns Marvel, and coincidentally was ground zero for the measles outbreak, has been weaving vaccine propaganda into their stories. This is termed “behavior placement” in which subtle messages intended to alter human behavior are woven into shows. It should be noted that watching television instantly switches a viewer’s brainwaves into the alpha state, which are associated with higher suggestibility.