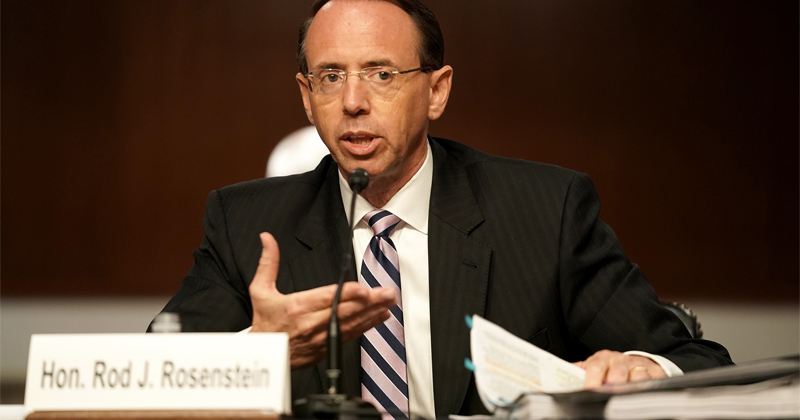 If you watched the news yesterday, you probably missed former acting attorney general Rod Rosenstein, who testified before Congress about his role in the Russia collusion investigation.

That’s because the major news networks didn’t cover it.

Where coverage of the Russia investigation was wall-to-wall, day after day saturation, the examination of how that investigation got it so spectacularly wrong hasn’t evinced much interest from the press.

Indeed, the collusion narrative was fed by a tsunami of press coverage. A study published in the Washington Times shows just how overwhelming it was.

“By far, the biggest news story of the Trump presidency has been the Russia investigation. As of August 15, the three broadcast network evening newscasts have devoted a combined 1,854 minutes to the probe, or nearly one-fifth (19.6 percent) of all of their Trump news. Yet virtually none of that airtime (just 62 minutes, or 3.3 percent) has been spent scrutinizing Robert Mueller’s investigation — a big shift from twenty years ago, when the networks made Ken Starr’s conduct the focus of much of their coverage,” wrote Rich Noyes, senior analyst for Newsbusters.org, a conservative press watchdog.

“But unlike the media’s hostility to the Starr investigation that led to President Clinton’s impeachment 20 years ago, the media this time have seemed utterly uninterested in investigating the investigator,” the analyst noted in the study.

As Joseph Wulfsohn of Fox News reports, there appeared to be a studied indifference to Rosenstein’s testimony from the media.

The hearing, which went from late morning to early afternoon, did not receive any live coverage from CNN nor MSNBC, who hyped the Russia collusion narrative for years before Special Counsel Robert Mueller concluded that there was no collaboration between the Trump campaign and the Kremlin during the 2016 election. Both CNN and MSNBC offered a live-stream of the hearing on their websites.

All three broadcast networks, ABC, NBC, and CBS, also avoided the hearing in their evening programs. They did, however, manage to squeeze in the scathing late-breaking remarks that emerged from former Defense Secretary Gen. Jim Mattis, who denounced President Trump divisiveness in a piece published in The Atlantic just 30 minutes before the evening programs aired on the East Coast.

That sound you hear is crickets chirping.

The Rosenstein testimony was a non-event. It didn’t happen because the media says it didn’t happen. Nothing to see here. Move along.

Except Rosenstein, who appointed Robert Mueller as special prosecutor in the Russian investigation, had some interesting things to say, including that if he knew what he knows today, he wouldn’t have authorized wiretaps on Carter Page.

Rosenstein also testified Wednesday that he would not have signed a FISA warrant renewal application for Page had he known about the since-revealed misconduct surrounding those warrants — while faulting the FBI for its handling of the documents.

“If you knew then what you know now, would you have signed the warrant application?” committee Chairman Lindsey Graham, R-S.C., asked Rosenstein.

“No, I would not,” Rosenstein said.

That’s worth a page 3 story in the New York Times, at least, isn’t it? Guess not.

I’m sure they’ll tell us that the riots were the top story and they’d be right. But the short shrift given not only Rosenstein’s testimony but the entire investigation of John Durham into the origins of the Russian investigation cannot be explained away as “conspiracy theories” — not when Rosenstein himself approves of that probe, calling it “reasonable.”

“I knew an investigation into the dossier would be far more complicated and take far more time,” Rosenstein said, explaining he wanted Mueller’s investigation to be “focused” and “resolved as expeditiously as possible.”

He then noted that Durham is looking at that issue.

“I am grateful we wrapped up the special counsel phase in 22 months, and if there is other information to be uncovered, I’m confident it will be uncovered,” he said.

When Rosenstein testifies again — as he almost certainly will — the media will claim it’s “old news” and say they don’t need to cover it.