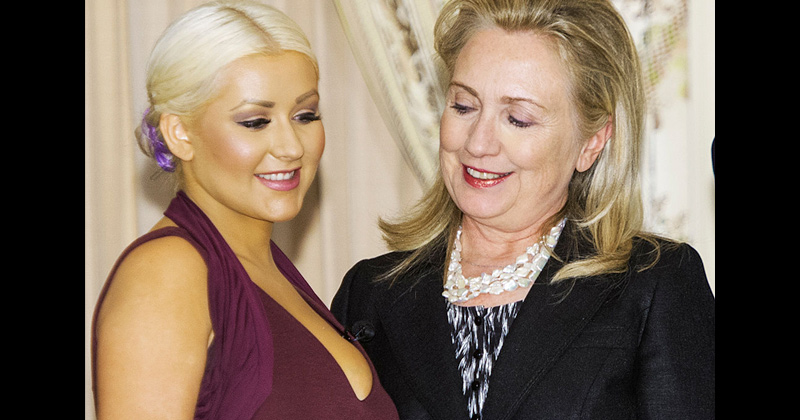 Hillary Clinton denied she’d ever had any lesbian affairs during an interview with radio host Howard Stern Tuesday.

Speaking about how she met husband Bill in college, Hillary claimed she thought “He was a good guy… he was so handsome, really handsome, he looked like a Greek god… he was very attractive.”

She went on for the first time ever to address rumors of her alleged interest in the same sex, saying, “Well, contrary to what you might hear, I actually like men.”

As if not believing her, Stern asked Clinton to mockingly swear under oath she’d never experimented with women.

For years, rumors have swirled alleging Hillary is a lesbian – or at least bi-sexual, propagated by people with personal ties to the Clinton dynasty.

One of President Clinton’s mistresses, Gennifer Flowers, for instance, in 2013 alleged Bill was well aware of his wife’s predilection for the same sex.

Clinton told her “Hillary was bisexual and he didn’t care,” Flowers told the UK’s Daily Mail.

“I don’t know Huma or the Weiners,” Flowers said, referring to rumors that Hillary was in a same-sex relationship with her top aide. “I just know what Bill told me and that was that he was aware that Hillary was bisexual and he didn’t care. He should know.”

“He said Hillary had eaten more p***y than he had,” Flowers added.

Clinton insider Larry Nichols has also asserted he was informed by Bill Clinton himself that Hillary was a lesbian, telling The Alex Jones Show in June 2015 she’d “had more women than [Bill] had.”

“It was hard enough to cover up for the affairs of Bill, but it was extremely difficult to cover up for Hillary and her lesbian affairs,” Nichols told Jones. “And it was tough and she was tough. She’s a butch.”

Nichols also described an instance in which Secret Service agents at the White House heard commotion emanating from the upstairs living quarters, and entered the room to find Hillary in bed with Night Court actress Markie Post.

“They were in bed together and Bill pulled up a chair and wanted to watch and Hillary was throwing ashtrays and laughs at him,” Nichols claimed. “That’s the sicko people we call the Clintons.”

In April 2015, The National Enquirer also ran a story on Clinton’s notorious private server which claimed she had the emails destroyed due to the contents exposing her lesbian lovers.

“The ENQUIRER learned the list of Hillary’s lesbian lovers includes a beauty in her early 30s who has often traveled with Hillary; a popular TV and movie star; the daughter of a top government official; and a stunning model who got a career boost after allegedly sleeping with Hillary,” the gossip site reported.

“Hillary made the huge mistake of mixing public and private messages while using her personalized email server – before risking a massive scandal by refusing to make the documents public,” an unnamed source reportedly told The Enquirer.

One thing is certain, as long as Hillary continues to insert herself in the public spotlight, rumors of her gay sexual orientation will continue to follow her like a scorned lesbian ex-lover.

The Clinton’s had their own little village on Epstein’s pedo-island. A psychologist warns us we better realize Epstein, Clintons, Jimmy Saville, Dennis Hastert, etc are not aberrations, but typical of the elite.