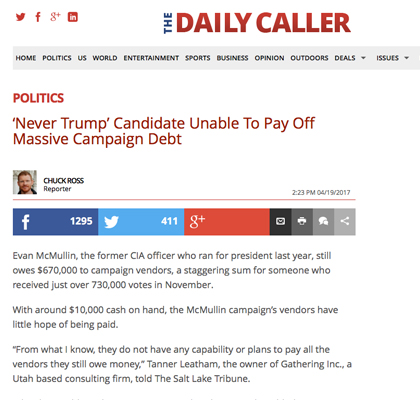 Former #NeverTrump presidential candidate Evan McMullin is eying a run for the House seat soon to be vacated by Representative Jason Chaffetz, despite his inability to pay off his presidential campaign’s $670,000 debt.

McMullin, a former CIA agent and banker for Goldman Sachs, confirmed in an email to the Washington Examiner that he was considering a run for Senate against incumbent Republican Orrin Hatch or the House against Chaffetz in 2018.

Chaffetz’s recent announcement indicating he will not seek reelection could make a run in Utah’s 3rd congressional district more appealing for McMullin.

“I’ve been considering challenging Hatch or Chaffetz, or not running at all in 2018. Obviously, this development today is significant, but there are other important factors. I still haven’t made a decision,” McMullin said.

McMullin, along with his former running-mate Mindy Finn, currently runs Stand Up Republic, an anti-Trump organization dedicated “to help Americans stand up in defense of the fundamental principles that have made this country the true home of liberty and a source of hope for many around the world.”

Any campaign by McMullin would face one significant hurdle: his inability to pay off his presidential campaign’s $670,000 debt. 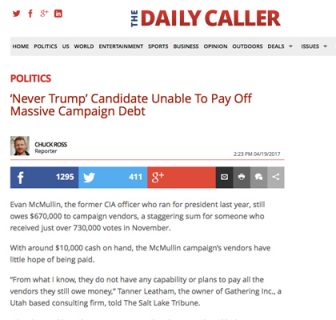 “From what I know, they do not have any capability or plans to pay all the vendors they still owe money,” said Tanner Leatham, owner of the Utah-based consulting firm Gathering Inc., in an interview with The Salt Lake Tribune. “They have told me they cannot pay us what they owe.”

According to the campaign’s latest filing with the Federal Elections Commission, the $670,000 is owed to seven different companies. Gathering Inc. is owed just over $10,000, while the Florida-based law firm Hopping, Green and Sams is owed more than $500,000.

Despite receiving 21% of the vote statewide in Utah, and over 30% in Utah County (the major population center of the 3rd Congressional district), McMullin would likely face several formidable challengers, including State Senators Deidre Henderson and Curt Bramble, and State Representative Mike McKell.