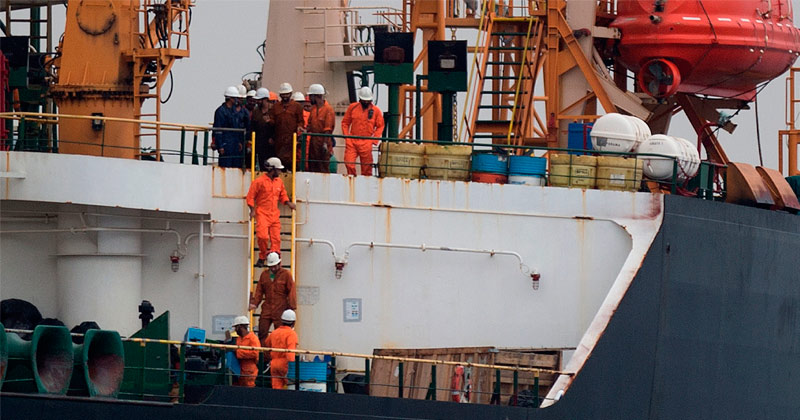 Audio, allegedly of the Islamic Revolutionary Guard Corps (IRGC) warning a British warship not to interfere in high-profile tanker incidents near the Strait of Hormuz, has been shared by Iranian media.

The recording, published by the Iranian Tasnim News Agency on Monday, appears to contain brief excerpts from the radio exchanges between IRGC patrol boats and a British warship, which occurred during two separate incidents near the Strait of Hormuz earlier this month.

Tensions between Tehran and London escalated on July 4 after British Royal Marines seized Iranian supertanker Grace 1, off the southern coast of Spain, which was suspected of transporting oil to Syria in violation of EU sanctions. Iran denied any wrongdoing.

On July 11, the British government said its frigate HMS Montrose was forced to intervene to prevent three Iranian boats from blocking the path of UK-flagged oil tanker British Heritage. The IRGC denied this claim, saying they had “no encounters” with foreign ships that day.

An audio recording of what's reported to be the conversation between a British naval ship and an Iranian naval officer ahead of the seizure of a UK-flagged oil tanker in the Strait of Hormuz was released by maritime security company @GlobalDryad on Sunday. pic.twitter.com/S8TuYyO9m1

In the audio, however, an IRGC officer can be heard warning a British ship, referred to as F-236 in the recording, which is Montrose’s hull number.

“The tanker British Heritage is under my control. You are ordered: do not interfere in my operation,” the Iranian officer says, according to the audio.

On July 19, the IRGC seized the British-flagged oil tanker Stena Impero in the Strait of Hormuz, which they said violated maritime rules. The vessel’s operator denied breaching any regulations, and London demanded its immediate release.

Several days later, Danish maritime security risk firm Dryad Global published what it said was a snippet of the communications between the ships. In the recording, the Iranian boat said it wanted to inspect the tanker for a “security reason.” British frigate Montrose responded by warning the Iranians against interfering in the tanker’s voyage.

Tasnim’s audio purportedly contains the radio chatter from the same incident. “You are requested not to interfere in this issue,” the IRGC officer tells the frigate.

“I am in the vicinity of an internationally-recognized strait, with a merchant vessel in my vicinity conducting transit passage,” a voice, allegedly belonging to an officer on board Montrose replies.

The Iranian vessel then issues another warning: “Don’t put your life in danger.”

When the recording was published, it was played over the footage of Iranian forces boarding tanker Stena Impero from a helicopter.

The incidents involving tankers prompted Iran and the UK to accuse each other of “piracy.” London proposed the deployment of a joint European flotilla to safeguard shipping through the Strait of Hormuz. Iran warned that this move would lead to more tensions and argued that the security in the strait should be upheld by the Persian Gulf states, not foreign powers.