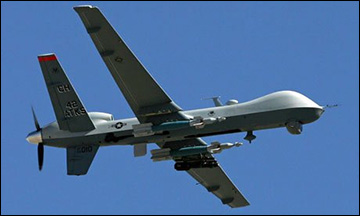 A bipartisan Bill that would force President Obama to reveal casualties from covert US drone strikes has been put before the US Congress.

If successful, the bill would require the White House to publish an annual report of casualties from covert US drone strikes.

The Bill would also compel the White House to reveal how it defines combatants and civilians in its covert drone war.

However the annual casualty counts proposed by the bill will not include those killed and injured in drone attacks on conventional battlefields, including Afghanistan and any country where the US officially declares war in the future.

The Bureau revealed the US and UK had launched almost 1,200 drone strikes in Afghanistan between 2008 and 2012. However in March 2013 the Bureau discovered the US military had stopped publishing data on drone use in Afghanistan and had deleted the few months’ data it had previously released from its publicly available records.

The bill says the first report would include casualties from the strikes in covert operations from the six previous years, ensuring all drone strikes under President Obama were included.

There have been at least 397 drone strikes in Pakistan, Yemen and Somalia during Obama’s two terms. They have killed at least 2,183 people including 279 civilians according to the Bureau’s estimates, based on open-source information. While there were fewer drone strikes launching during President Bush’s administration – 52 strikes between 2002 and January 2009 – they killed more people on average than the Obama’s strikes. At least 416 people died in Bush era strikes, including 167 civilians.

The bill is co-sponsored by California Democrat Adam Schiff and North Carolina Republican Walter Jones. Schiff said: ‘An annual report will provide a modest, but important, measure of transparency and oversight regarding the use of drones.’

‘Despite our best efforts to ensure to a near-certainty that no civilians will be killed or injured, sometimes strikes do result in civilian casualties. We must be more transparent and accountable, both with ourselves and with the world, and narrow the perception gap between what really happens, and what is reported or assumed.’

Jones said: ‘Our government’s use of drones for targeted killings should be subject to intense scrutiny and oversight.’ He added: ‘I believe this legislation is an important step in that direction,’ he added.

The sponsors are trying to gather bipartisan support for their bill which has been referred to the House Permanent Select Committee on Intelligence and the House Armed Services Committee. The intelligence committee then armed services committee will consider whether to allow the bill to progress to be debated by the House of Representatives.

The independent legislative-data-analysis firm GovTrack gives the bill a negligible chance of passing the committee stage. However the bill has similar language to the Intelligence Authorisation Act and could be offered as an amendment to that bill if it reaches the House.

Calls for transparency over drone strikes have grown steadily over the past 18 months. In October 2013 both Amnesty International and Human Rights Watch (HRW) called for greater transparency and accountability after investigating US drone attacks in Pakistan and Yemen.

Fourteen US-based human rights charities, including Reprieve, Amnesty and HRW, released a joint statement supporting the bill, saying the bill ‘would give the public and all members of Congress much-needed information’ about lethal drone strikes.

Steven Hawkins, executive director of Amnesty International USA, said: ‘The White House approach to drone killings has been “trust us,” but that’s untenable.’ The White House must provide its the drone casualty data, he added.

The bill has been put forward less than a month after a UN investigator called on the US to release casualty figures from drone operations.

UN special rapporteur Ben Emmerson told delegates to the UN Human Rights Committee in March: ‘In my judgement the states responsible for these strikes are under a present and continual legal obligation to disclose the results of their own fact finding inquiries or explain why it is that no such inquiries have so far taken place.’ He stressed: ‘This is not a political demand for an explanation’.

Emmerson has been investigating the use of armed drones by the US, UK and Israel for the UN since January 2013. In that time he has repeatedly called on the US to ‘release its own data on the level of civilian casualties’ caused by drone strikes. He has been critical of the way information about the US drone programme has been controlled, calling it an ‘almost insurmountable obstacle to transparency’.

The majority of drone strikes outside conventional battlefields have been carried out by the CIA in Pakistan. Emmerson told a committee of British MPs and Lords last month the CIA is a fundamentally secret organisation that neither confirms nor denies the existence of its operations.

Giving the CIA the drone programme ‘is rather like giving MI6 a fleet of aircraft and telling them to go off and do what they needed to do. It is an unthinkable proposition in this jurisdiction and it was an unwise decision for the United States,’ he said.