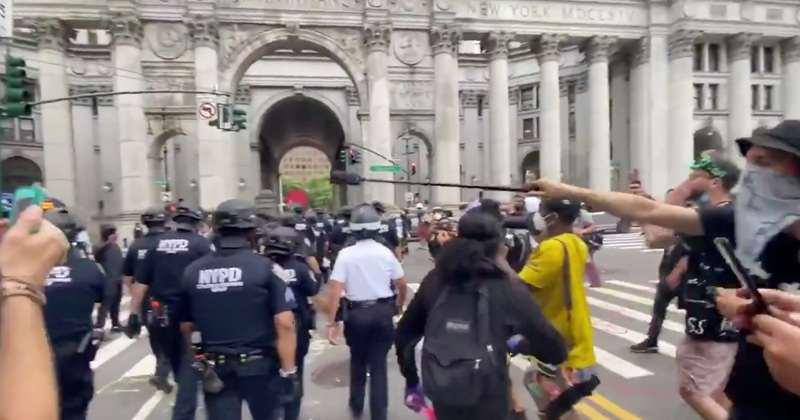 Unsettling footage out of Manhattan Wednesday morning shows NYPD officers being cheered on as they turn over control of the City Hall building to protesters.

The video shows NYPD cops marching away from the area as hundreds of protesters cheered, with some chanting “Whose streets? Our streets!” and “Na na na na, hey hey hey, goodbye.”

NYPD leave their positions at City Hall in NYC, leaving it to Antifa and Black Lives Matter at the new CHAZ. pic.twitter.com/LN1lS7xwr9

The Black Lives Matter and Defund Police leftist protesters were waiting overnight for, and are no doubt now emboldened by, the city council’s late night passage of a $1 billion cut from the NYPD budget.

On Wednesday morning, police confronted protesters and attempted to gain back control of the area at 1 Centre Street in Downtown Manhattan being dubbed “New CHAZ,” removing barricades but lacking the manpower to effectively quell the occupation.

More and more have arrived at Occupy City Hall and are taking back the barriers that protesters made for the encampment pic.twitter.com/JZRqWeYd01

Protesters are chanting, singing and dancing in the street and inside the occupy zone. Pretty much all officers have left the immediate area now, aside from a few directing traffic: pic.twitter.com/UmQxwFOkAj

In other CHAZ news, Seattle Mayor Jenny Durkan on Wednesday ordered occupants of CHAZ/CHOP to leave the protest zone within 48 hours as police attempt to retake the area recently overrun by shootings and violence.

Officers enforcing today's order are wearing a higher-level of protective gear. Police are utilizing this equipment because individuals associated w/the CHOP are known to be armed and dangerous/may be associated with shootings, homicides, robberies, assaults &other violent crimes

“Anyone who remains in the area, or returns to the area, is subject to arrest,” police said.