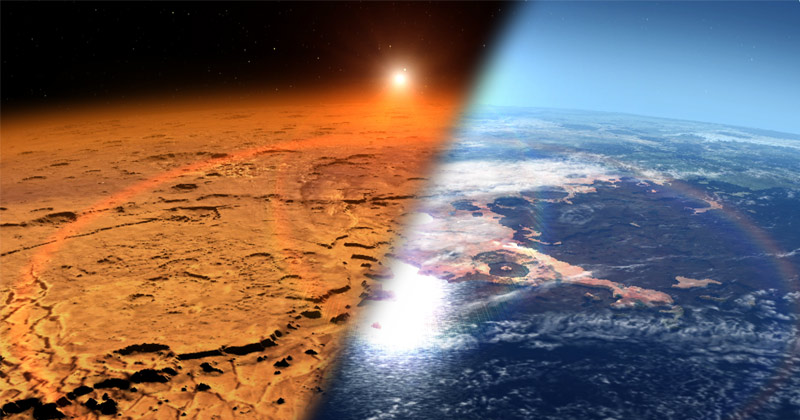 A key tracer used to estimate how much atmosphere Mars lost can change depending on the time of day and the surface temperature on the Red Planet, according to new observations by NASA-funded scientists.

Previous measurements of this tracer – isotopes of oxygen – have disagreed significantly. An accurate measurement of this tracer is important to estimate how much atmosphere Mars once had before it was lost, which reveals whether Mars could have been habitable and what the conditions might have been like.

Mars is a cold, inhospitable desert today, but features like dry riverbeds and minerals that only form with liquid water indicate that long ago it had a thick atmosphere that retained enough heat for liquid water – a necessary ingredient for life – to flow on the surface. It appears that Mars lost much of its atmosphere over billions of years, transforming its climate from one that might have supported life into the desiccated and frozen environment of today, according to results from NASA missions such as MAVEN and Curiosity and going back to the Viking missions of 1976.

However, many mysteries about the Red Planet’s ancient atmosphere remain. “We know Mars had more atmosphere. We know it had flowing water. We do not have a good estimate for the conditions apart from that – how Earthlike was the Mars environment? For how long?” said Timothy Livengood of the University of Maryland, College Park and NASA’s Goddard Space Flight Center in Greenbelt, Maryland. Livengood is lead author of a paper on this research published online in Icarus August 1.

One way to estimate how thick the original atmosphere of Mars was is to look at isotopes of oxygen. Isotopes are versions of an element with different mass due to the number of neutrons in the atomic nucleus. Lighter isotopes escape to space faster than heavier isotopes, so the atmosphere that remains on the planet gets gradually enriched in the heavier isotope. In this case, Mars is enriched compared to Earth in the heavier isotope of oxygen, 18O, versus the lighter and much more common 16O. The measured relative amount of each isotope can be used to estimate how much more atmosphere there was on ancient Mars, in combination with an estimate for how much faster the lighter 16O escapes, and assuming that the relative amount of each isotope on Earth and Mars was once similar.

The problem is that measurements of the amount of 18O compared to 16O on Mars, the 18O/16O ratio, have not been consistent. Different missions measured different ratios, which results in different understandings of the ancient Martian atmosphere. The new result provides a possible way to resolve this discrepancy by showing that the ratio can change during the Martian day. “Previous measurements on Mars or from Earth have obtained a variety of different values for the isotope ratio,” said Livengood. “Ours are the first measurements to use a single method in a way that shows the ratio actually varying within a single day, rather than comparisons between independent devices. In our measurements, the isotope ratio varies from being about 9% depleted in heavy isotopes at noon on Mars to being about 8% enriched in heavy isotopes by about 1:30pm compared to the isotope ratios that are normal for Earth oxygen.”

This range of isotope ratios is consistent with the other reported measurements. “Our measurements suggest that the previous work all may have been done correctly but disagreed because this aspect of the atmosphere is more complex than we had realized,” said Livengood. “Depending where on Mars the measurement was made, and what time of day on Mars, it is possible to get different values.”

The team thinks the change in ratios during the day is a routine occurrence due to ground temperature, in which the isotopically heavier molecules would stick to cold surface grains at night more than the lighter isotopes, then are freed (thermally desorb) as the surface warms up during the day.

Since the Martian atmosphere is mostly carbon dioxide (CO2), what the team actually observed were oxygen isotopes attached to carbon atoms in the CO2 molecule. They made their observations of the Martian atmosphere with the NASA Infrared Telescope Facility on Mauna Kea, Hawaii, using the Heterodyne Instrument for Planetary Winds and Composition developed at NASA Goddard. “While trying to understand the broad spread in estimated isotope ratios that we retrieved from the observations, we noticed that they were correlated with the surface temperature that we also obtained,” said Livengood. “That was the insight that set us on this path.”

The new work will help researchers refine their estimates of the ancient Martian atmosphere. Because the measurements can now be understood to be consistent with the results of such processes in other planets’ atmospheres, it means they are on the right track for understanding how the Martian climate changed. “It shows that the atmospheric loss was by processes that we more or less understand,” said Livengood. “Critical details remain to be worked out, but it means that we don’t need to invoke exotic processes that could have resulted in removing CO2 without changing the isotope ratios, or changing just some ratios in other elements.”

The research was funded by the former NASA Planetary Astronomy Program, now the NASA Solar System Observations Program. NASA is exploring our Solar System and beyond, uncovering worlds, stars, and cosmic mysteries near and far with our powerful fleet of space and ground-based missions.