President Trump suggested Comey threw Lynch “under the bus,” in a Sunday tweet.

Comey throws AG Lynch “under the bus!” Why can’t we all find out what happened on the tarmac in the back of the plane with Wild Bill and Lynch? Was she promised a Supreme Court seat, or AG, in order to lay off Hillary. No golf and grandkids talk (give us all a break)!

Trump asked, “Why can’t we all find out what happened on the tarmac in the back of the plane with Wild Bill and Lynch?  Was she promised a Supreme Court, or AG [Attorney General], in order to lay off Hillary.  No golf and grandkids talk (give us all a break)!”

Trump’s tweet discounts the possibility the tarmac meeting involved a personal conversation, arguing instead that Bill Clinton bribed Lynch to exonerate Hillary over the email scandal by promising Lynch either a Supreme Court position, perhaps replacing Antonin Scalia, or a reappointment as Attorney General.

The same day, QAnon clarified that the Clinton “plan” now appears to have been that Loretta Lynch (LL) would remain as Attorney General under a President Hillary Clinton.

In addition, QAnon repeated his assertions that Scalia was murdered, and that the murder was orchestrated by CIA Director John Brennan.

QAnon also suggested that there is a recording of the tarmac meeting, perhaps one captured by U.S. intelligence agencies, that may be released soon “to be playing in a theater near you.”

As first reported by Infowars.com during February, QAnon then had dropped two posts that suggested the tarmac deal.

The first post dropped on Feb. 6 and was timestamped at 01:34:50, approximately 1:35 am ET on Tuesday, appearing as follows:

In this post, the critical line is the fourth line, in which QAnon writes: Tarmac meeting [SC/LL deal > AS 187].

Decoded, QAnon is suggesting that when Bill Clinton met with Lynch on the tarmac, he offered her the Supreme Court seat of former Judge Antonin Scalia in return for Lynch intervening with the FBI to end the FBI’s criminal investigation into Clinton’s email server, exonerating Clinton from any criminal charges.

That Scalia was murdered is suggested by the initials “AS,” standing for Antonin Scalia, and the number 187 which the urban dictionary associates with “murder, death, kill.”

The second QAnon post was timestamped 01:41:04, approximately 1:41 am ET on Tuesday, written in response to a comment asking if Lynch was offered a Supreme Court position if all charges were dropped in the criminal investigation of Hillary Clinton’s use of a private email server at the State Department. 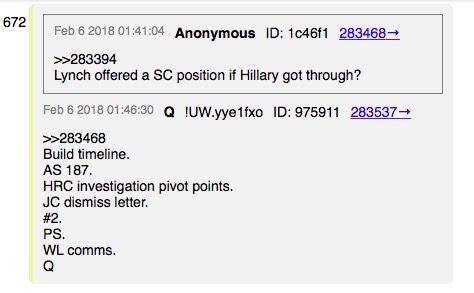 QAnon responds by encouraging us to build the timeline, repeating his assertion that Scalia was murdered.

Key dates in the timeline include the following:

Decoding this post, we are directed to the Scalia murder (“AS 187”), the key “HRC investigation pivot points” leading to Comey’s final letter dismissing Clinton of criminal charges, read to the public on July 5, 2016.

Then we are led to “#2,” namely, FBI Deputy Director Andrew McCabe, and to “PS,” namely FBI Peter Strzok, both of whom played roles in making sure the language of Comey’s letter dismissing the Clinton criminal indictment was “toned down” so as not to include the precise statutory language defining a national security crime involving the handling of classified information.

Finally, by “WL comms,” QAnon suggests WikiLeaks is prepared to confirm either by a transcript and/or an audio tape of the Clinton-Loretta Lynch tarmac meeting that the key move necessary in making sure Hillary Clinton would be exonerated was the offer to Loretta Lynch of Scalia’s Supreme Court seat.