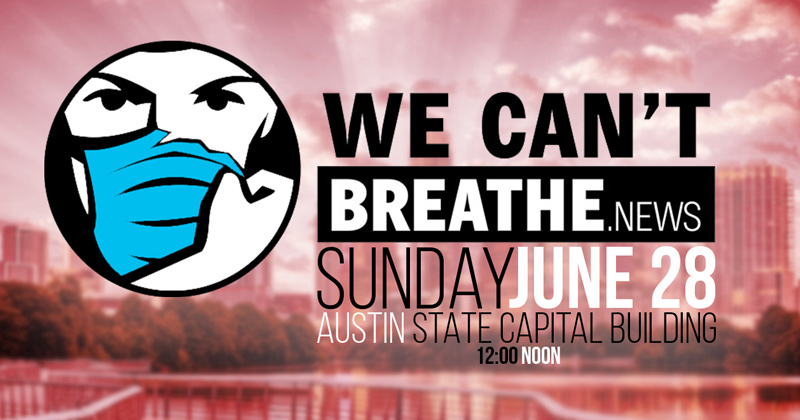 Freedom lovers in Texas have launched WeCantBreathe.News to ignite a nationwide movement against the medical tyranny of mandatory public face mask rules.

An upcoming event, titled the “Protest and Open Air Church Service,” is set for Sunday, June 28th in Austin, Texas, starting at 12 noon at the Texas Capitol South Entrance on 11th street.

The group will walk to the Capitol steps where they will hold a prayer session, prior to activists and business owners delivering speeches discussing how they’ve been affected by the lockdown and mask orders.

The group will then march to the Governor’s Mansion to voice their disapproval of Texas Gov. Greg Abbott’s recent push to mandate masks statewide.

Any and all freedom lovers are welcome and MASK WEARING IS DISCOURAGED! Alex Jones and Infowars crew will be attending.

We are standing against the Bill Gates agenda NOW to stop the United Nations/WHO medical tyranny hellbent on bringing in total lockdown til whole world capitulates to medical ID, cell phone tracking and forced inoculation.

Go to WeCantBreathe.News for informational fliers, videos and more to help spread the movement across the country.

We are also pushing for President Trump to sign an Executive Order vetoing these unconstitutional actions by these tyrant cowards.

Just like Trump had to sign an Executive Order to open churches – he waited three months while Antifa ran foaming at the mouth in the streets with BLM burning down the nation – we demand action now!

A historical look at the globalist, pro-vaccine, Big-Pharma, Communist background of the World Health Organization

The response by Blue State Governors that saw asymptomatic patients sheltered in nursing homes with the most vulnerable is ratcheting up to become a follow the money scheme that resulted in thousands of deaths is as evil as it comes.