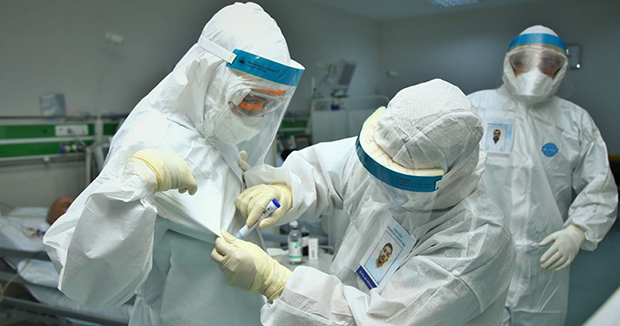 With a new cluster of cases prompting school closures and Hong Kong, and a team of “independent” WHO investigators beginning their inquiry into the earliest days of the outbreak, is it any surprise that the Beijing propaganda machine is pumping out stories about new and even more deadly pathogens emerging outside China’s borders?

On Thursday, the Global Times reported that a new form of pneumonia had been discovered in Kazakhstan that is even more deadly than SARS-CoV-2. The report was couched in the form of a “travel warning” issued by Beijing’s embassy in Astana (yes, we know that’s no longer the city’s official name).

According to the report, this new disease, which is of unknown origin, had a “much higher” fatality rate than COVID-19, which has infected more than 50,000 people in the country.

Alex Jones breaks down the authoritarian plan to implement medical tyranny and force the public to submit.

The Chinese Embassy in Kazakhstan on Thursday warned Chinese citizens living in the country of a local pneumonia of unknown cause, which local media reported has a “much higher” fatality rate than COVID-19.

The unknown pneumonia in Kazakhstan caused 1,772 deaths in the first six months of the year, including 628 people in June alone, including Chinese citizens, the embassy said in a statement on its WeChat platform on Thursday, citing Kazakh media reports.

Little about this “new pneumonia” is understood, other than the fact that it has no connection to COVID-19, according to the report. The embassy promised to release more information, such as accurate and up-to-date numbers for deaths and infections. As we noted in the passage above, the disease caused 1,772 deaths in the first six months of the year, including 628 people in June alone, according to the embassy.

No figures were shared about the exact fatality rate, though Kazakhstan’s health department is studying this new “virus of this pneumonia” with extreme care.

The embassy quoted local media as saying that since mid-June, almost 500 people have been infected with the pneumonia in three regions of Kazakhstan.

Kazakhstan’s healthcare minister said on Wednesday that the number of patients sickened by the pneumonia is two to three times more than those who have been infected with COVID-19, Kazakh news agency Kazinform reported.

The minister said that it plans to publish accurate tallies of confirmed cases as early as next week, noting that while it’s not necessary to publish the number, the public needs to know the true situation, Kazinform reported.

According to official data, the number of pneumonia cases is 2.2 times greater this June than it was in 2019 when there were 1,700 cases, said the English version of the Kazinform report, which lacked details.

Kazakhstan has reported 51,059 confirmed cases of COVID-19, including 264 deaths as of press time, according to Johns Hopkins University’s coronavirus resource center.

“The COVID-19 situation in Kazakhstan is under control,” reads a statement sent by an official from the Ministry of Foreign Affairs of Kazakhstan to the Global Times on Thursday.

The ministry’s statement didn’t respond to questions about the Chinese embassy’s warning of the unknown pneumonia.

In a hilarious move, the Kazakh government has denied the story, according to CNN.

Even the WHO’s Dr. Mike Ryan helped legitimize the Global Times story by confirming that the agency would be looking into the cases, despite the fact that they are likely “mostly COVID-19”, as Dr. Ryan said.

For those who aren’t familiar with China’s tactics regarding COVID-19, stories like this about other deadly forms of pneumonia being discovered abroad are intended to sow doubt in the minds of China’s citizens. What if this new strain of pneumonia that has no connection to mainland China has also been killing tens of thousands of people around the world? What if everything being reported in the Western press actually doesn’t tell the whole story?

It’s just another reminder that some of the best propaganda is often subtle.