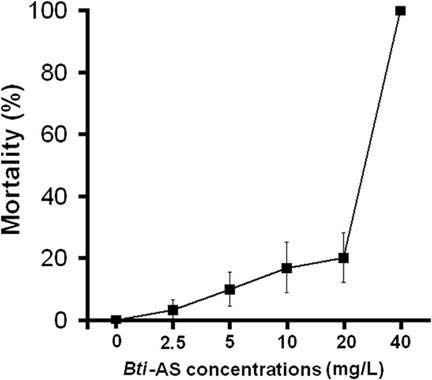 The biotech industry once told the world that Bt insecticidal crops were only harmful to insects and were harmless to pets and people. But a new study of the ecotoxicological risks of widespread commercial Bt spraying found otherwise. Introban®, a Bt-containing product, caused 100% lethality in amphibians.

Dr. Eva Sirinathsinghii tested the effects of Introban®, a commercial formulation of a Bacillus thuringiensis (Bt) subtype, Bacillus thuringiensis subsp. israelensis (Bti). She discovered that Introban® is toxic to tadpoles of an Argentinian species of frog at environmentally relevant concentrations. The Bti subtype is meant for mosquitoes, in order to prevent the spread of infectious disease.

After being exposed for only 48 hours to sub-lethal concentrations of Introban®, tadpoles of a common South American frog developed serious health problems that led to their death.

Genotoxic effects occurred in days, not weeks or months. Intestinal enzymes that would normally protect the tadpoles from oxidative stress were affected, and the results were 100% lethal. The tadpoles’ immune systems were rendered useless.

Although data have been presented suggesting that Bti products are safe for use, Dr. Lajmanovic at the National Council for Scientific and Technical Research Argentina and her colleagues found that the Bti products used widely in urban and suburban areas have dire effects for the aquatic ecosystem and environment.

At present, Bt products constitute over 60% of biopesticides (excluding crops genetically engineered to express Bt proteins). They are marketed for being highly target-specific and thus of low toxicity to other organisms, such as humans. Introban®, for example, targets mosquitoes – but it also kills other organisms, including amphibians, in the same ecosystem. Once again, the promises by the industry are hollow.

Those in favour of Bt products claim their specificity is due to the alkaline conditions of insect guts that solubilise the crystal (Cry) toxins, as well as the subsequent specific binding of the toxins to receptors expressed in insect, which are absent in mammalian guts, creating pores in the gut walls and subsequent death.

Amphibian tadpoles, like mosquito larvae, are primarily herbivorous and have a stomach poorly differentiated with a neutral pH while its intestine, as in the mosquito’s midgut, also lacks an acidic pH.

These factors make them potentially more susceptible than other species to Bti products. Furthermore, numerous studies show toxicity of Bt products, including GM Bt crops to other non-target organisms including Daphnia magna water fleas (a common model aquatic organism used in ecotoxicology), rats as well as allergenic and respiratory problems in humans, though toxicity of the genetic process itself could also be a factor with regards to GM crops.

Bt toxins have also been detected in the blood of pregnant women and their foetuses, showing their capacity to survive the human digestive tract. Aside from Bt toxicity itself, commercial formulations contain many added so-called ‘inert’ chemicals such as surfactants that have been shown to be toxic in their own right and could explain to an unknown degree the results in this study.”

This work highlights the false claim that Bt affects only its target organisms and is harmless to non-targets. Thus, its use is a biosafety concern for people as well as for amphibians. People are exposed to Bt products through genetically modified Bt crops and through the Bt biopesticides that are sprayed on crops.

Furthermore, amphibians are key indicators of overall ecosystem health. Therefore, testing for adverse effects of pesticides in amphibians is important for early detection of potential pesticide toxicity for animals higher up in the food chain.