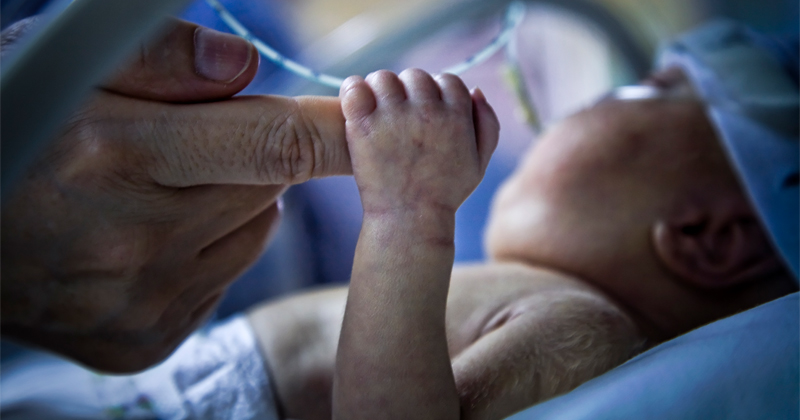 A new technique that can spot a potential preterm birth in asymptomatic high-risk women, with up to 73% accuracy months before delivery, has been developed by scientists at the University of Warwick.

Their technique is detailed in a paper for Scientific Reports and could lead to a cost-effective, non-invasive, point-of-care test that could form part of routine care for women identified as being at risk of delivering prematurely. This could enable healthcare staff to better support those women during pregnancy and birth and help to reduce the risks to their baby.

Preterm birth is the leading cause of death in children under five and at present there are few accurate tools to predict who is going to deliver preterm.

The technology they used works by separating the vapour molecules by combining two techniques that first pre-separates molecules based on their reaction with a stationary phase coating (a gas-chromatograph), followed by measuring their mobility in a high-electric field (an Ion Mobility Spectrometer). Using machine learning techniques, the team ‘trained’ the technology to spot patterns of VOCs that were signs of bacterial vaginosis.

The researchers then analysed vaginal swabs taken from pregnant women attending a preterm prevention clinic as part of their routine care. These women either had prior histories of preterm births or a medical condition that makes it more likely that they would deliver preterm but had shown no other indications that they would deliver preterm and were considered asymptomatic.

Vaginal swabs were taken during the second and third trimesters of pregnancy and the outcome of all pregnancies followed up. The first test had an accuracy of 66% while the second, closer to the time of delivery, had an accuracy of 73%. The test results means that 7/10 women with a positive test went on to deliver preterm. 9/10 women with a negative test delivered after 37 weeks.

Lead author Dr Lauren Lacey of Warwick Medical School and an obstetrics and gynaecology registrar at University Hospitals Coventry and Warwickshire NHS Trust said: “We’ve demonstrated that the technology has good diagnostic accuracy, and in the future it could form part of a care pathway to determine who would deliver preterm.

“There are a number of different factors that could cause a woman to go into preterm labour. Because of that, prediction is quite difficult. There are lots of things we can look at – the patient’s history, the examination, ultrasound scan, various other biomarkers that are used in clinical practice. No single test fits all.

“VOC technology is really interesting because it reflects both the microbiome and the host response, whereas other technologies look for a specific biomarker. It’s the beginning of looking at the association of VOCs with preterm delivery. We want to develop this and look at whether these patterns could be implemented into a care pathway.”

The next stage of research would see a small VOC analysis device stored at a hospital so samples could be analysed on site. The hope is that it could eventually be developed for use in a labour ward triage so tests can be administered and results obtained rapidly.

Professor James Covington from the University of Warwick School of Engineering said: “There is a strong interest around the world in the use of vapours emanating from biological waste for the diagnosis and monitoring of disease. These approaches can non-invasively measure the health of a person, detect an infection or warn of an impending medical need. For the need described in the paper, the technology can be miniaturised and be easily located in a maternity ward. The analysis only takes few minutes, the instrument needs no specialised services (just power) and is easy to use. We believe that the analysis of odours will become commonplace for this and many other diseases in the near future.”

The researchers behind this study are part of the newly established Centre for Early Life, based at Warwick Medical School at the University of Warwick, which launches on 31 July. The new Centre builds on the University’s existing expertise in early life research by aiming to pioneer research into the formative factors in our lives such as this latest research.

Professor Siobhan Quenby, Co-Director of the new Centre and Honorary Consultant at University Hospital Coventry and Warwickshire NHS Trust said: “I am delighted that the new Centre for Early Life will facilitate further interdisciplinary collaborations, to the benefits of my patients.”