Despite the issue receiving national media attention, Obama supporters continue to threaten to riot if Mitt Romney wins the presidential election, raising the prospect of civil unrest if Obama fails to secure a second term.

The new threats continue to dominate Twitter and the vast majority make no reference to press coverage of the issue over the last week, illustrating the fact that they are a legitimate expression of how many Obama voters plan to respond if Romney comes out on top, and not merely a reaction to media hype.

An Infowars.com story written by Michael Snyder which was picked up by the Drudge Report over the weekend and has since gone viral documented how Twitter was flooded with messages from Obama supporters threatening to riot, a sign that “whichever side loses this election will accuse the other side of stealing the election.”

The story was subsequently picked up by innumerable media outlets. Highly respected economist and philosopherThomas Sowell also voiced his concerns that race riots could ensue if Obama is not re-elected.

Checking Twitter feeds this morning, we discovered that threats to riot on behalf of Obama supporters are still flooding in, with the users seemingly unaware of the fact that the media has now picked up on the buzz.

We checked the Twitter accounts and virtually all of them are owned by people who have made hundreds or thousands of previous tweets, proving they are genuine accounts and not fakes.

Examples of what people are saying include the following;

“If obama dont get re-elected & romney wins .. on life every white persons getting pistol whipped and im startin a riot.” (SOURCE)

“If Obama don’t win lets start a riot so Romney know what he’s getting himself into.” (SOURCE)

“You know you ain’t shit if you gotta “MAKE” Mafukas vote for ROMNEY ! …. Mannnn OBAMA better get back in office . Or BLACK FOLKS will riot.” (SOURCE)

“If Romney wins im goin on a rampage.” (SOURCE)

“If Mitt Romney wins the election I think its our duties as Black folks to riot and fuck shit up.” (SOURCE)

“If every action IS met with an equal and opposite reaction ..what should workers do to employers if Romney’s elected? #Riot in the streets!!” (SOURCE)

“If Romney becomes president let’s all start a riot.” (SOURCE)

Although most of the individuals posting the messages don’t even attempt to justify why they plan to riot, others have pointed to fears about a Romney administration withdrawing or limiting government handouts.

You can check out some of the screenshots from these Twitter users below. We didn’t even include all of the messages because there are simply too many to track.

In addition to rhetoric about starting riots if Obama loses, Twitter users have also targeted Mitt Romney with death threats.

“I swear if Mitt Romney becomes president, I’m gonna be the one to assassinate his a*s (sic),” wrote one

Given the fact that Americans routinely riot in response to results of sporting events that don’t go their way, the notion that civil unrest could ensue if Obama is defeated is perfectly plausible.

Only this weekend, almost a thousand skateboarders rioted because they were unable to attend a movie premiere in Hollywood because the theater only holds 600 people.

Racial attacks carried out by mobs of black youths have also gone underreported in the media, most notably in places like Chicago and Virginia, as well as attacks at fairgrounds in Wisconsin.

Over the past two years, both Europe and the Middle East have been rocked by riots, but America has yet to witness domestic disorder on any significant scale. Even serene Switzerland is gearing up for a massive social dislocation.

However, the federal government has clearly been preparing for such a fallout, with huge ammunition purchases. Police departments across the country are also getting ready for unrest.

Are Obama supporters serious when they threaten to riot if Romney wins, or are they just full of hot air? Let us know your thoughts in the comments below. 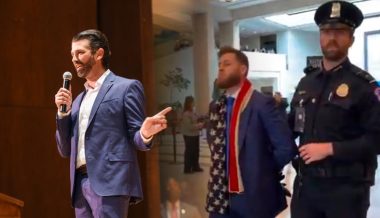