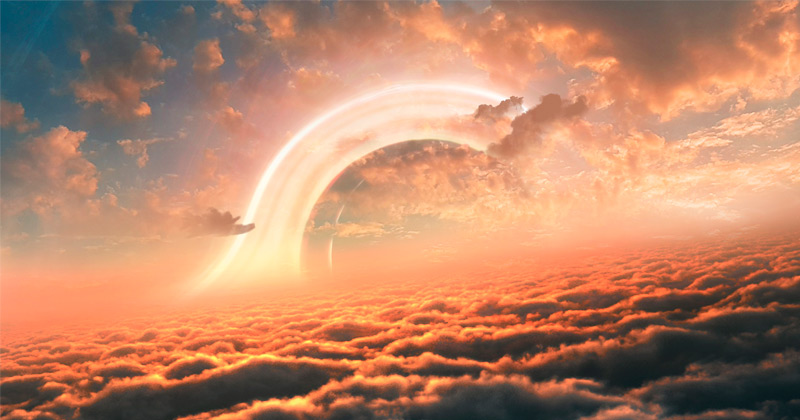 The darkness surrounding the Hale Telescope breaks with a sliver of blue sky as the dome begins to open, screeching with metallic, sci-fi-like sounds atop San Diego County’s Palomar Mountain.

The historic observatory smells of the oil pumped in to support the bearings that make this giant telescope float ever so slightly as it moves to track the stars.

Since February 2018, scientists have been testing an instrument at the Hale Telescope called the New Mexico Exoplanet Spectroscopic Survey Instrument, or NESSI. A collaboration between NASA’s Jet Propulsion Laboratory in Pasadena, California, and the New Mexico Institute of Mining and Technology, NESSI was built to examine the atmospheres of planets that orbit stars beyond our Sun, or exoplanets, providing new insights into what these worlds are like.

So far, NESSI has checked out two “hot Jupiters,” massive gas giants orbiting close to their stars and too scorching to sustain life. One, called HD 189773b, has such extreme temperatures and winds that it may rain glass sideways there. The other, WASP-33b, has a “sunscreen” layer of atmosphere, with molecules that absorb ultraviolet and visible light.

Recently, NESSI observed these planets crossing their host stars, proving the instrument would be able to help confirm possible planets previously observed by other telescopes. Now it is ready for more detailed studies of distant cousins of our solar system. And while the instrument is designed to look at planets much larger than Earth, NESSI’s methods could be used to search for Earth-size planets someday as well once future technologies become available.

“NESSI is a powerful tool to help us meet the family,” said Mark Swain, an astrophysicist and the JPL lead for NESSI. “Twenty-five years ago, to our best knowledge, we thought we were alone. Now we know that—at least in terms of planets—we’re not, and that this family is extensive and very diverse.”

NESSI views the galaxy in infrared light, which is invisible to the human eye. It stares at individual stars to observe the dimming of light as a planet passes in front of its host star—an event called a transit. From the transit, astronomers can learn how big the planet is relative to its host star. When the planet passes directly behind the star and re-emerges, it’s called an eclipse. NESSI can look for signatures of molecules from the planet’s atmosphere detectable in starlight before and after the eclipse.

Inside NESSI, devices that focus infrared light spread it into a rainbow, or spectrum, filtering it for particular wavelengths that relate to the atmospheric chemistry of distant planets.

“We can pick out the parts of the spectrum where the molecules are, because that’s really what we’re looking for in the infrared in these exoplanets—molecular signatures of things like carbon dioxide and water and methane to tell us that there’s something interesting going on in that particular planet,” said Michelle Creech-Eakman, principal investigator for NESSI at New Mexico Tech.

NESSI is equipped to follow up on discoveries from other observatories such as NASA’s Transiting Exoplanet Survey Satellite(TESS). TESS scans the entire sky in visible light for planets around bright, nearby stars, but the planet candidates it discovers must be confirmed through other methods. That is to make sure these signals TESS detects actually come from planet transits, not other sources.

NESSI can also help bridge the science between TESS and NASA’s James Webb Space Telescope, scheduled to launch in 2021. The largest, most complex space observatory ever to fly, Webb will study individual planets to learn about their atmospheres and whether they contain molecules associated with habitability. But since Webb’s time will be precious, scientists want to point it only at the most interesting and accessible targets. For example, if NESSI sees no molecular signatures around a planet, that implies clouds are blocking its atmosphere, making it unlikely to be a good target for Webb.

“This helps us see if a planet is clear or cloudy or hazy,” said Rob Zellem, an astrophysicist and the JPL commissioning lead on NESSI. “And if it’s clear, we’ll see the molecules. And if then we see the molecules, they’ll say, “Hey, it’s a great target to look at with James Webb or Hubble or anything else.'”

A Window to the Galaxy

NESSI began as a concept in 2008 when Swain visited Creech-Eakman’s astrobiology class at New Mexico Tech. Over coffee, Swain told his colleague about exoplanet observations he had done with a ground-based telescope that didn’t turn out well. Creech-Eakman realized a different instrument combined with the right telescope could accomplish Swain’s goals. On a napkin, the two sketched an idea for what would become NESSI.

They designed the instrument for the Magdalena Ridge Observatory in Magdalena, New Mexico. But once the researchers began using it in April 2014, the instrument didn’t work as expected.

Swain suggested moving NESSI to Palomar’s 200-inch Hale Telescope, which is much larger and more powerful—and also more accessible for the team. Owned and operated by Caltech, which manages JPL for NASA, Palomar has designated observing nights for researchers from JPL.

Relocating NESSI—a 5-foot-tall (1.5-meter-tall) blue, cylindrical device with wires coming out of it—wasn’t just a matter of placing it on a truck and driving southwest. The electrical and optical systems needed to be reworked for its new host and then tested again. NESSI also needed a way to communicate with a different telescope, so University of Arizona doctoral student Kyle Pearson developed software to operate the instrument at Palomar. By early 2018, NESSI was ready to climb the mountain.

A crane lifted NESSI more than 100 feet (30 meters) to the top of the Hale Telescope on Feb. 1, 2018. Technicians installed the instrument in a “cage” at the Hale’s prime focus, which enables all of the light from the 530-ton telescope to be funneled into NESSI’s detectors.

The team celebrated NESSI’s glimpse of its first star on Feb. 2, 2018, but between limited telescope time and fickle weather, more than a year of testing and troubleshooting would pass (never mind the time the decades-old lift got stuck as Zellem and Swain ascended to the telescope cage).

“We track down the problems and we fix them. That’s the name of the game,” Creech-Eakman said.

As the team continued making adjustments in 2019, Swain tapped a local high school student to design a baffle—a cylindrical device to help direct more light to NESSI’s sensors. This piece was then 3-D-printed in JPL’s machine shop.

When NESSI finally detected transiting planets on Sept. 11, 2019, the team didn’t pause to pop open champagne. Researchers are now working out the measurements of HD 189773b’s atmosphere. The team has also compiled a list of exoplanets they want to go after next.

“It’s really rewarding, finally, to see all of our hard work is paying off and that we’re getting NESSI to work,” Zellem said. “It’s been a long journey, and it’s really gratifying to see this happen, especially in real time.”