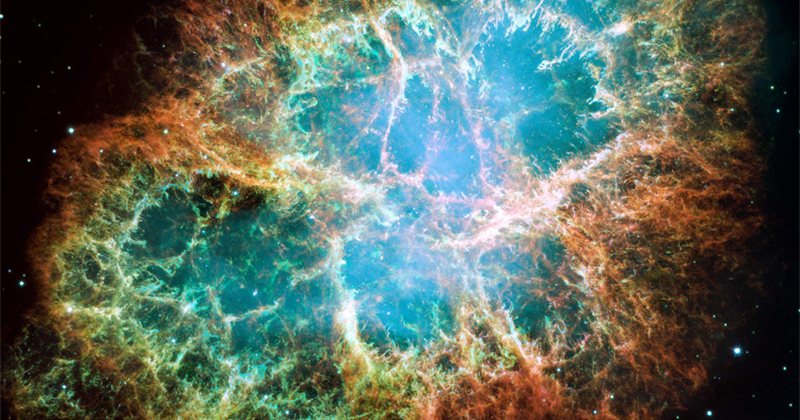 A Finnish research group has found strong evidence for the presence of exotic quark matter inside the cores of the largest neutron stars in existence.

The conclusion was reached by combining recent results from theoretical particle and nuclear physics to measurements of gravitational waves from neutron star collisions.

All normal matter surrounding us is composed of atoms, whose dense nuclei, comprising protons and neutrons, are surrounded by negatively charged electrons. Inside what are called neutron stars, atomic matter is, however, known to collapse into immensely dense nuclear matter, in which the neutrons and protons are packed together so tightly that the entire star can be considered one single enormous nucleus.

Up until now, it has remained unclear whether inside the cores of the most massive neutron stars nuclear matter collapses into an even more exotic state called quark matter, in which the nuclei themselves no longer exist. Researchers from the University of Helsinki now claim that the answer to this question is yes. The new results were published in the journal Nature Physics.

“Confirming the existence of quark cores inside neutron stars has been one of the most important goals of neutron star physics ever since this possibility was first entertained roughly 40 years ago,” says Associate Professor Aleksi Vuorinen from the University of Helsinki’s Department of Physics.

With even large-scale simulations run on supercomputers unable to determine the fate of nuclear matter inside neutron stars, the Finnish research group proposed a new approach to the problem. They realised that by combining recent findings from theoretical particle and nuclear physics with astrophysical measurements, it might be possible to deduce the characteristics and identity of matter residing inside neutron stars.

In addition to Vuorinen, the group includes doctoral student Eemeli Annala from Helsinki, as well as their colleagues Tyler Gorda from the University of Virginia, Aleksi Kurkela from CERN, and Joonas Nättilä from Columbia University.

According to the study, matter residing inside the cores of the most massive stable neutron stars bears a much closer resemblance to quark matter than to ordinary nuclear matter. The calculations indicate that in these stars the diameter of the core identified as quark matter can exceed half of that of the entire neutron star. However, Vuorinen points out that there are still many uncertainties associated with the exact structure of neutron stars. What does it mean to claim that quark matter has almost certainly been discovered?

“There is still a small but nonzero chance that all neutron stars are composed of nuclear matter alone. What we have been able to do, however, is quantify what this scenario would require. In short, the behaviour of dense nuclear matter would then need to be truly peculiar. For instance, the speed of sound would need to reach almost that of light,” Vuorinen explains.

A key factor contributing to the new findings was the emergence of two recent results in observational astrophysics: the measurement of gravitational waves from a neutron star merger and the detection of very massive neutron stars, with masses close to two solar masses.

In the autumn of 2017, the LIGO and Virgo observatories detected, for the first time, gravitational waves generated by two merging neutron stars. This observation set a rigorous upper limit for a quantity called tidal deformability, which measures the susceptibility of an orbiting star’s structure to the gravitational field of its companion. This result was subsequently used to derive an upper limit for the radii of the colliding neutron stars, which turned out to be roughly 13 km.

Similarly, while the first observation of a neutron star dates back all the way to 1967, accurate mass measurements of these stars have only been possible for the past 20 years or so. Most stars with accurately known masses fall inside a window of between 1 and 1.7 stellar masses, but the past decade has witnessed the detection of three stars either reaching or possibly even slightly exceeding the two-solar-mass limit.

Somewhat counterintuitively, information about neutron star radii and masses has already considerably reduced the uncertainties associated with the thermodynamic properties of neutron star matter. This has also enabled completing the analysis presented by the Finnish research group in their Nature Physics article.

In the new analysis, the astrophysical observations were combined with state-of-the-art theoretical results from particle and nuclear physics. This enabled deriving an accurate prediction for what is known as the equation of state of neutron star matter, which refers to the relation between its pressure and energy density. An integral component in this process was a well-known result from general relativity, which relates the equation of state to a relation between the possible values of neutron star radii and masses.

Since the autumn of 2017, a number of new neutron star mergers have been observed, and LIGO and Virgo have quickly become an integral part of neutron star research. It is precisely this rapid accumulation of new observational information that plays a key role in improving the accuracy of the new findings of the Finnish research group, and in confirming the existence of quark matter inside neutron stars. With further observations expected in the near future, the uncertainties associated with the new results will also automatically decrease.

“There is reason to believe that the golden age of gravitational wave astrophysics is just beginning, and that we will shortly witness many more leaps like this in our understanding of nature,” Vuorinen rejoices.