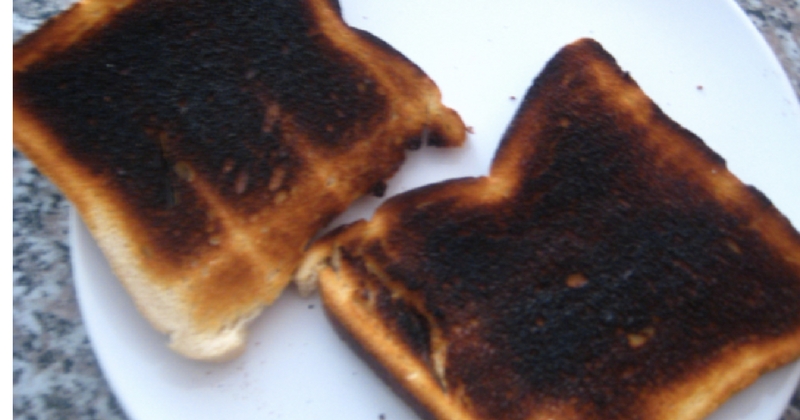 A new health warning has been issued from the other side of the pond in the United Kingdom: that consuming burned potatoes and toast can up your risk of cancer.

According to their research, starchy foods like potatoes and bread contain a chemical known as acrylamide, which makes the food brown when heated up (and also turns it black if overcooked).

Large quantities of the chemical in one’s diet have been linked to cancer in mice.

Because of this, the Food Standards Agency (FSA) in the United Kingdom has begun a campaign named “Go for Gold” to ensure that people don’t overcook their starchy food to a dangerous point.

Many of these studies have been done over the past 15 years and the chemical was identified in food in 2002, but there has yet to be a definitive human link to cancer and the chemical.

However, because mice are very similar to humans in their reactions, scientists believe that it would possibly pose issues for human beings as well.

Steve Wearne, director of policy at the Food Standard Agency, stated of the link:

“Our research indicates that the majority of people are not aware that acrylamide exists, or that they might be able to reduce their personal intake. We want our ‘Go for Gold’ campaign to highlight the issue so that consumers know how to make the small changes that may reduce their acrylamide consumption whilst still eating plenty of starchy carbohydrates and vegetables as recommended in government healthy eating advice.”

Studies on the link between the chemical and humans have been mixed, but some studies do suggest that an increase in acrylamide in one’s diet can increase a risk for kidney, endometrial and ovarian cancers.

In order to ensure that you don’t consume too much of this chemical, researchers are urging people to curb their intake of fried food, particularly French fries and potato chips.

This, however, is reasonable nutritional advice in spite of the presence of the chemical.

Generally, to reduce your risk of cancer, you should eat a healthy diet full of fruits and vegetables and abstain from excessive drinking and smoking cigarettes.

Additionally, it is important to exercise and keep your weight in the health BMI range for your height.