System can be hacked and exploited by pervs

If the successes of its past game console launches are any indicator, sales of Microsoft’s latest effort – set to hit the market November 22 – can be expected to be strong. However, this console, which seeks to be your living room’s all-in-one home entertainment unit, is immensely different from the rest.

In line with the pervading surveillance culture, where microphones and cameras embedded within tablets, cell phones, laptops, light posts, vehicles and other devices watch and listen intently, Microsoft is making sure to load its gaming device with the latest spy tech goodies, which they claim will enhance users’ experiences.

But the most disturbing and worrisome Xbox One/Big Brother gossip is not that Xbox maker Microsoft was reportedly involved in the NSA PRISM scandal, or that the console’s Kinect peripheral sits listening with a multi-microphone array 24/7 for voice commands, or that its noise-isolation capabilities enable it to distinguish your voice among a crowd of your friends.

The most startling revelation is that the new Kinect device, to be sold in combination with the XBox One, at times has the ability to map out in high-definition the shape of genitalia, something fine and dandy for consenting adults, but which could ultimately be exploited by hackers and perverts to gain access to images of children.

The cameras aren’t exactly designed to scope out your man or womanhood; it just happens that way because the technology simply works too well, says Fast Company writer Mark Wilson.

In viewing a demo of the new Kinect from Microsoft Research, Wilson says he noticed something unmistakable that gave him cause for concern. “… I noticed, alongside the intricacies of a hoodie and jeans–and there’s no graceful way to put this–a dong.”

“The Kinect hardware/software is now so effective at deciphering the bumps and folds of clothing,” says Wilson, “that it can pinpoint a man’s package down to its pant leg, carving out the distinctive folds in our trousers that society, backed by a bit of shadowy denim, has become remarkable at ignoring.”

Although it’s as yet unknown whether the new Xbox will be snapping or storing images, past examples of government mischief teach us to err on the side of caution.

In 2010, an Orlando, Fla. federal courthouse admitted that their Brijot Gen2 millimeter wave screening device had stored “approximately 35,314 images.” On its website, Brijot confirmed their machine could store up to 40,000 images and records.

Likewise, laptops issued by a suburban Philadelphia school in 2010 were also found to be capturing “secret webcam pictures of a high school student when he was partially undressed or sleeping in his bed.” Additionally, a motion filed against the school stated that “Thousands of webcam pictures and screen shots have been taken of numerous other students in their homes…”

And just last August, a hacker spouted insults at a 2-year-old girl — through her baby monitor.

Indeed, every new technology is open to hackers, as evidenced in the case of Google Glass earlier this year. By this metric, it is no stretch to say the new Xbox will undoubtedly be compromised by hackers or perverts, and that this system needs to be investigated.

It was already widely known that the new Kinect’s sensors would be highly invasive, but this should add a whole new level of unease for parents who buy their kids all the latest, trendiest gadgets.

For instance, it was already known that the Kinect’s high-definition camera creates a model of your human skeleton and can track you moving about in your home, in addition to being able to monitor your heart rate in order to gauge your level of enjoyment.

And it was already known that the Kinect will carefully study users’ eye movements and facial expressions in order to “reward” them with meaningless “virtual rewards” like avatars, in addition to creating profiles of individuals’ likes and dislikes, allowing the Xbox One to serve up customized ads, services, or shows it thinks users might like. 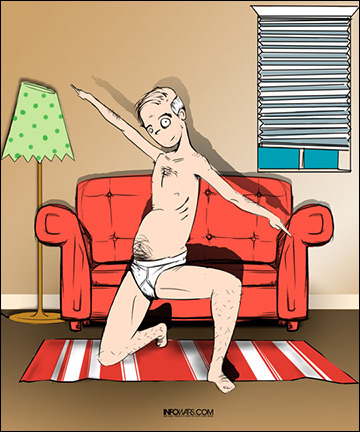 The fact that Microsoft’s already had to revamp a few Xbox One features means more people are becoming concerned with privacy. It’s had to revise the requirement of a permanent Internet connection, as well as its decision to require the Kinect, both of which were initially needed for the console to function.

As Wilson notes, allowing the new Kinect into your living room is on par with inviting one of the TSA’s millimeter wave scanners or backscatter X-ray machines into your home. But in contrast to the somewhat voluntary nature of the TSA’s prying eyes, the most unnerving thing about Kinect’s genitalia-viewing potential is that the gaming market’s target audience is primarily children and most will not know they can “opt-out.”

Nevertheless, Wilson approaches his find optimistically, saying “a small percentage of Xbox owners may ever have such an experience. This topographical view is essentially a debug mode (I believe, accessible to gamers, but far from standard), and most Kinect experiences will likely render you as a bubbly asexual cartoon or a character with stock anatomy, smoothing over everything from hoodie strings to the overzealous nipples.”

However, anxieties over Microsoft’s alleged participation in setting up backdoors for the NSA should still leave gamers and parents wary of next generation consoles’ supposed technological advancements.

Below is the video Wilson analyzed.