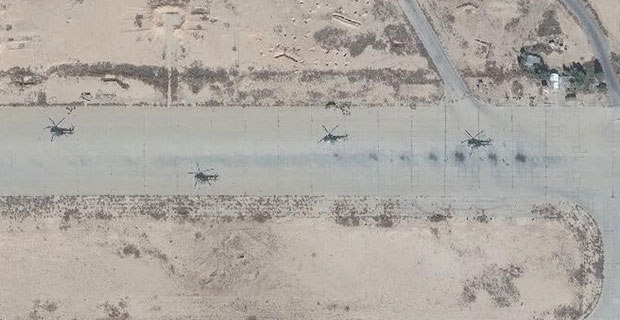 In a report today covering Russian airstrikes against the Islamic State, The New York Times said Homs, the city where Russia has targeted ISIS, “is not under the control of the Islamic State.”

The Times reported the airstrikes were in Homs, while CNN said they were near the city. The “Russian airstrike near the city of Homs ‘has no strategic purpose’ in terms of combating ISIS, which ‘shows they are not there to go after ISIL.'”

Omitted in the report is the fact that while the city is not controlled by ISIS, the terrorist army has mounted a series of attacks on a Syrian airbase 90 kilometers east of the city in the province, which is also called Homs.

The Tiyas base, one of the largest military airports controlled by the Syrian government, hosts military advisers and technicians from Russia and Iran.

A Russian helicopter squadron and three fighter-bomber squadrons, including one of Russian-supplied Sukhoi Su-24M2s, are stationed at the airbase, the Voice of America reported last month.

The base is crucial to the air defense of Syria.

Tiyas, also known as Fortress T4, “serves as a barrier between the now Islamic State controlled Tadmur, and regime controlled Homs, further adding to its importance,” Bellingcat, an investigative website, reported on June 29.

In May ISIS captured Tadmur, a city near Palmyra, the ancient heritage site partially destroyed by the Islamic State.

In June ISIS launched a large scale offensive near the Tiyas airbase and the T-4 Pumping Station located in the eastern countryside of the Homs Governorate.

The Syrian Army recovered checkpoints over run by ISIS outside of Qasr Al-Hur, near the airbase, and also attacked ISIS positions in nearby Al-Bayarat, Khanayfees, the Palmyra Driving School, the Palmyra Castle, and Burj Al-SyriaTel, according to The Arab Source.

In its reportage, The New York Times failed to mention the strategic importance of the Tiyas airbase and gave the impression ISIS does not have a presence the Homs Governorate.

This sort of disingenuous reporting is to be expected from the Times. It has long served as a propaganda asset for the Pentagon and the national security state.

As Infowars.com and others have noted, not only is the United States not interested in defeating ISIS in Syria, it has actively armed the terrorist army and is responsible for its rise.

In May declassified US Defense Intelligence Agency documents from 2012 revealed the United States and its partners in the Gulf states and Turkey support the Islamic State and plan to establish a Salafist principality in Syria.