Creating inflation is job one at the Fed

On December 23, 1913, the banksters created the private cartel masquerading as a government agency, the Federal Reserve, to manipulate fiat money and engineer asset bubbles designed to level economies.

On December 16, 2013, the current chairman of the Fed, Ben Bernanke, otherwise known as Helicopter or Bubbles Ben, said in a speech celebrating the triumph of financial sector will over the common man and his pocketbook that the cartel will resist all political pressure.

Bernanke took the opportunity to declare himself an inflation warrior just like his predecessors, Paul Volcker and Alan Greenspan. This is doublespeak in its full glory.

In fact, Bernanke’s legacy is inflation, albeit miscalculated. “The way that inflation is calculated has changed more than 20 times since 1978, and each time it has been changed the goal has been to make it appear to be lower than it actually is,” notes Zero Hedge. “If the rate of inflation was still calculated the way that it was back in 1980, it would be about 8 percent right now and everyone would be screaming about the fact that inflation is way too high.”

Obama and crew play along with the trick. The government cites something called the “chained consumer price index” (chained CPI) to measure the deleterious effect of inflation on people’s standard of living.

Chained CPI is an effort to alter the perceived impact of inflation via the gimmick of “full substitution.” This is the assumption that when the price of one consumer product increases, consumers will simply substitute a similar, lower-cost product with no adverse effect. Thus, the government decides your standard of living is not affected if you can no longer afford to eat steak, as long as you can afford to eat hamburger.

“One of the tricks the CPI formula uses to keep the metric low is to remove food and energy from the CPI,” Duane Storey explains. “Unfortunately, since food and energy consume a large portion of most family’s disposable income, the removal of those items from the CPI limits its usefulness in tracking price inflation.”

The government came up with the CPI doozy to avoid raising the cost of living adjustment on the Social Security Ponzi scheme. It does not, however, prevent the government from jacking up taxes on folks who experience a nominal increase in income. Like a skilled Mafia lawyer, the government has all kinds of tricks up its sleeve when it comes to the practice of separating you from your money.

Bloomberg once ran a segment (see above) on the “hockey stick,” not the one used by warmists led by Al Gore that insist your diminishing standard of living is responsible for wrecking the planet, but another one based on inflation and the consumer price index. The index remained low, with minor bumps up and down, until 1913, when the Fed was established in the dead of night at Christmas, and then the hockey stick curve began to shoot up in earnest.

Likewise the value of the dollar, the real mark of inflation. The following chart gets the point across: 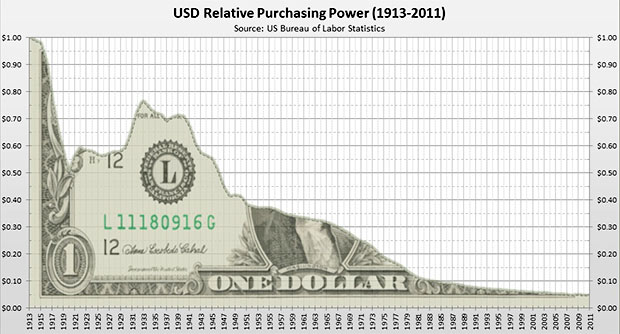 As you can see, our pathetic dollars are now almost entirely worthless. But that has not stopped the Fed from devaluing what puny worth is left.

In other words, the Federal Reserve has decided to engineer massive inflation while its current chairman insists the bankster cartel is in the business of controlling inflation.

Creating inflation is job one at the Fed. “The unelected policymakers at the Fed are also the last to feel the effects of inflation. In fact, they benefit from it, as does the government as a whole,” Ron Paul explains. Government colludes with the Fed to hide the real rate of inflation, currently around 9 percent. According to the warped-out CPI, though, you are experiencing a mere 2 percent inflation rate.

“If you trust the 9% number (which I believe is a more useful metric of inflation than the current one that uses fancy substitution math to come up with a metric that represents a reduced standard of living), then the purchasing power of every dollar is effectively halved in only 8 years. That means whatever you have in the bank will be worth only 50% of what it is today by the year 2018,” writes Duane Storey.

Meanwhile, Bubbles Ben, as he prepares to exit office and make way for the next bankster cigar store Indian, tells us he is a master inflation warrior and, for the most part, the corporate media print this fallacy without criticism.