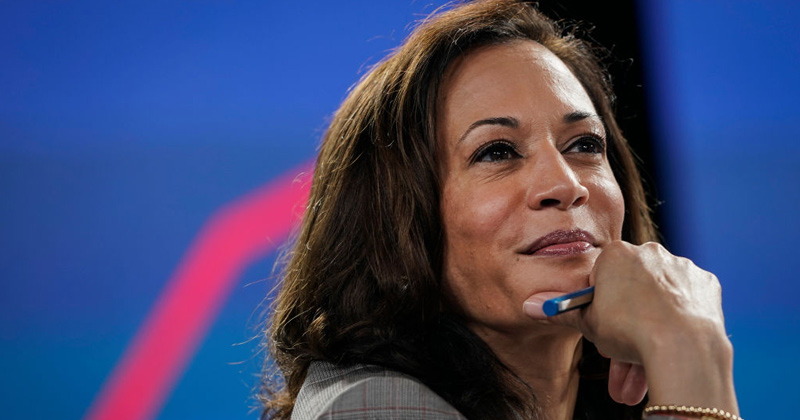 The article focused on the common debate among Constitutional scholars regarding the 12th Amendment.

According to the 12th Amendment, “no person constitutionally ineligible to the office of President shall be eligible to that of Vice-President of the United States.”

Article II of the Constitution specifies that “[n]o person except a natural born citizen…shall be eligible to the office of President.”

This being said, Eastman noted that neither of Harris’ parents were naturalized U.S. citizens at the time of Kamala’s birth in 1964.

Her father is from Jamaica, where the family business was owning slaves, and her mother is from India.

Because of her parents’ status, Kamala is not technically a “natural-born” citizen and is therefore not eligible to serve as vice president.

Eastman explained how some scholars argue the 14th Amendment classifies a “natural-born” citizen as anyone who was born in America.

However, he claimed these allegations are erroneous, explaining, “The language of Article II is that one must be a natural-born citizen. The original Constitution did not define citizenship, but the 14th Amendment does—and it provides that ‘all persons born…in the United States, and subject to the jurisdiction thereof, are citizens.’ Those who claim that birth alone is sufficient overlook the second phrase.”

After making his case, Eastman maintained, “Indeed, the Supreme Court has never held that anyone born on U.S. soil, no matter the circumstances of the parents, is automatically a U.S. citizen.”

In fact, when examining the original meaning of the 14th Amendment, the legal expert found Harris may not qualify for her current position as a U.S. senator.

Foreseeing a backlash to the claims made in the article, Eastman wrote, “I have no doubt that this significant challenge to Harris’ constitutional eligibility to the second-highest office in the land will be dismissed out of hand as so much antiquated constitutional tripe.”

“But the concerns about divided allegiance that led our nation’s Founders to include the ‘natural-born citizen’ requirement for the office of president and commander-in-chief remain important; indeed, with persistent threats from Russia, China and others to our sovereignty and electoral process, those concerns are perhaps even more important today,” he concluded.

Following cries of “racism” from Newsweek‘s leftist readers, the magazine issued an editor’s note stating, “Some readers reacted strongly to this essay, seeing it as an attempt to ignite a racist conspiracy theory. That is entirely inaccurate.”

Newsweek editors wrote a whole article defending the Eastman opinion piece and explaining to their reactionary followers that the op-ed was not written to create a race-based movement against Harris.

“Editor’s Note: Eastman’s Newsweek Column Has Nothing to Do With Racist Birtherism,” the response post was titled.

Instead, the editors explain, Eastman’s article “Was focusing on a long-standing, somewhat arcane legal debate about the precise meaning of the phrase ‘subject to the jurisdiction thereof’ in the Citizenship Clause of the 14th Amendment.”

The outlet made sure to distance the Eastman piece from the “birther” theories that looked into the birthplace and suspicious birth certificate of Barack Obama in 2008.

“We share our readers’ revulsion at those vile lies,” Newsweek ensured their base.

Will Eastman’s Constitutional concerns be debated on a national stage or will mainstream media dismiss such a conversation as a racist distraction?