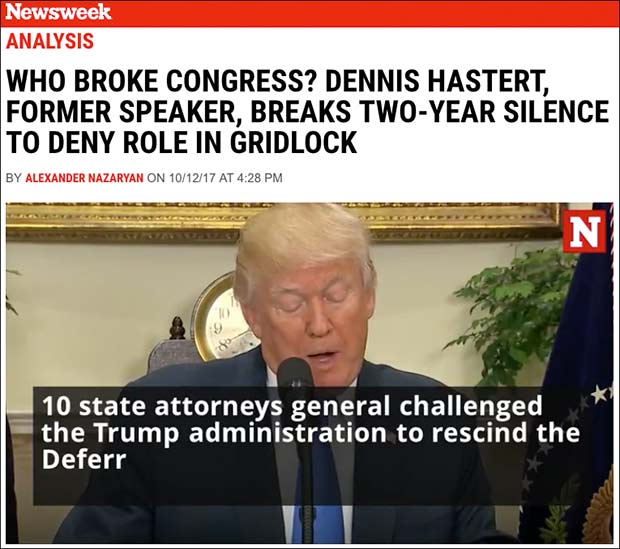 In a controversial article published Thursday, Newsweek asked Hastert, who recently served a 13-month sentence for a bank fraud conviction linked to his attempt to silence a former student he sexually abused during his time as a high school wrestling coach, to explain “what’s wrong with Trump’s Congress.”

Newsweeks’ use of Hastert to discuss congressional gridlock and the Trump presidency was immediately castigated by countless people on social media.

But definitely, let's hear his take on Congress! https://t.co/5dHNscVe1O

…..and a SERIAL PEDOPHILE. https://t.co/ZEVxUX6LO7

Hastert is a confessed and convicted pedophile. What the fuck is wrong with you, @Newsweek? https://t.co/HfmnMfW5pc

In case you were tempted to treat him as a pundit.

This is a weird way to spell "child molester Dennis Hastert" https://t.co/vc8BxJAbYB

.@Newsweek what is wrong with you? Hastert is a serially offending pedophile https://t.co/FfqiOEv0QF

In the face of mounting condemnation, the article’s author, Alexander Nazaryan, attempted to defend his actions by labeling Hastert a mere felon.

By that logic, people who have committed a serious felony should never be allowed to re-enter society. You want to go down that route? https://t.co/pAJofEFbpp

Unsurprisingly, Nazaryan’s response did little to quell outrage over the editorial decision.

People who molest children. Really? Have him babysit your children if you feel hes paid his dues.

could you get Jared Fogel's thoughts on Subway's rebrand please? Maybe see what OJ thinks about the Bills? Click bait hack.

You should call Jerry Sandusky next and get his opinions on the future college football. Since your a fan of these criminals

Are you gonna reach out to OJ for his commentary on Manson's next parole hearing?

Despite criticism from countless journalists and others, the article remains active on Newsweek’s website.

A federal judge in Chicago described Hastert as a serial “child molester” during his sentencing last year.

Although Hastert has not openly admitted to molesting children, the former house speaker’s counsel released a statement last year claiming Hastert was sorry for his “trangressions.”

“Mr. Hastert acknowledges that as a young man, he committed transgressions for which he is profoundly sorry,” the statement read. “He earnestly apologizes to his former students, family, friends, previous constituents and all others affected by the harm his actions have caused.”