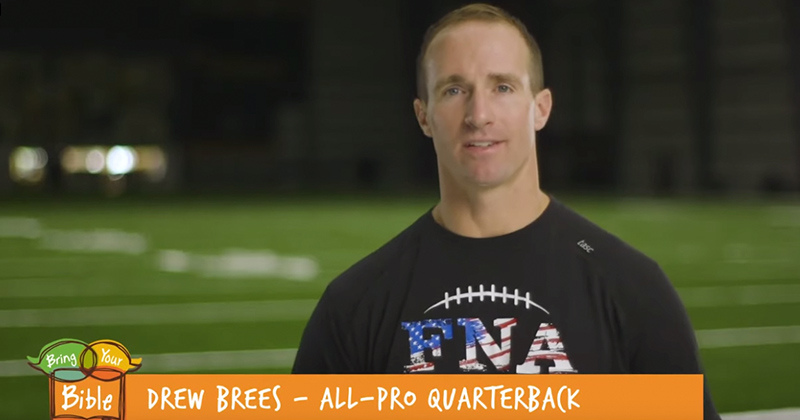 New Orleans Saints Quarterback Drew Brees is being criticized by the left for encouraging children to take their Bibles to school.

In a 22-second video published by Focus on the Family last week, Brees shared one of his favorite Bible verses and encouraged kids to participate in “Bring Your Bible To School Day,” taking place on October 3.

Following the video’s release, liberal media outlets and internet users became enraged at Brees for promoting the Bible with Focus on the Family.

The Hill said Brees appeared in an “anti-LGBTQ group’s video,” as well.

While the outrage was largely focused towards the organization because of their beliefs about same-sex marriage, Brees’ message had nothing to do with that subject.

Even if it did, it’s pathetic that Christians cannot voice their opinions without being bombarded with hate by virtue-signaling liberals.

Brees responded to critics in a video released on Twitter, saying, “Hopefully this sets the record straight with who I am and what I stand for. Love, Respect, and Accept ALL. I encourage you not to believe the negativity you read that says differently. It’s simply not true. Have a great day.”

Hopefully this sets the record straight with who I am and what I stand for. Love, Respect, and Accept ALL. I encourage you not to believe the negativity you read that says differently. It’s simply not true. Have a great day. pic.twitter.com/4RdTahE7EZ

There’s been a lot of negativity spread about me in the LGBTQ community recently based upon an article that someone wrote with a very negative headline, that I think led people to believe that somehow I was aligned with an organization that was anti-LGBTQ and so on and so forth.

I’d like to set the record straight, I live by two very simple Christian fundamentals and that is love the Lord with all your heart, mind and soul. And, love your neighbor as yourself.

I think the first one is very self-explanatory. The second one, love your neighbor as yourself, what does that mean?

It means, love all, respect all and accept all. So, that is actually how I live my life. That is what I try to do with my family, with my teammates, with people in my community, with my friends, all people. No matter your race, your color, your religious preference, your sexual orientation, your political [views].

When asked by a reporter if he knew about the group’s alleged anti-LGBTQ stance, Brees said he was unaware of any lobbying for anti-gay “type of stuff.”

“What’s a shame, is people will make headlines just to get hits, just to get views, and all of a sudden these rumors spread that are completely untrue,” he added.

Drew Brees when asked about if he knew what Focus on the Family stood for.. pic.twitter.com/5WG6CwEEqO

This is yet another attack on Christianity, as Infowars has documented time and time again.

For example, the world’s top rugby player Israel Folau nearly lost his career over social media posts expressing his religious views, and a Christian MP in Finland is being investigated for a hate crime after she posted an image with Bible verses to social media.

Last week, Owen Shroyer predicted a surge of pro-athletes speaking their minds, whether it be on religion, alternative-health, conservatism or any other taboo subject.

NFL star Larry Johnson joins The Alex Jones Show to fight for children’s rights to enjoy their childhood free from sexualization and manipulation.